University of Utah nuclear engineering Ph.D. candidate Codey Olsen is a passionate engineer, in it for the science and advancement of his field. From the moment you start talking to Olson, you could tell this is what he lives and breathes for, and probably what he’s thinking about all day. He has a strong background in physics, mathematics, and coding.

After doing his undergrad at Wartburg College in Waverly, Iowa, to study physics and mathematics, he was inspired by professor Luther Mcdonald to come to the U. He has been working with a radioactive source that had been underground since the 1960s. Olson and his team pulled it out in mid-2021 and ran simulations and designed a shield to protect students and faculty.

The radioactive source they used is a 60-year-old unused plutonium beryllium neutron source. Neutrons are emitted after alpha particles from the plutonium are absorbed into the beryllium, producing a spectrum of energies. Since the source is radioactive and dangerous to have around, they simulated the source of radiation codes to see if it changed at all. It was believed to be basically dead, but there was no information about it since it had been buried underground for so long. It increased in radioactivity some, but not substantially. This left Olson and his team to make two key decisions for the shield — choosing the material and the shape of the shield. They ended up making a 55-gallon drum filled with plastic. After undergoing radiation training and how to handle the source, they made final decisions on the shielding and built it.

Olson’s project has been accepted for publication, and he is currently awaiting a response from the Health Physics Journal. His work has also been presented at national conferences, such as the American Nuclear Society. 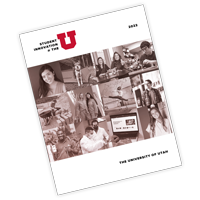 Find this article and a lot more in the 2022 “Student Innovation @ the U” report. The publication is presented by the Lassonde Entrepreneur Institute to celebrate student innovators, change-makers, and entrepreneurs.

About the Author: David Wimert