If you suffer from bruxism, you know the symptoms. Gnashing and grinding your teeth in your sleep causes sensitivity and teeth to flatten and chip. The standard of care for this condition is to just treat the symptoms — aspirin for the pain, a teeth guard for the tooth damage.

That is, until now.

A team of U students is developing a solution that could not only prevent the symptoms but also train people to stop grinding their teeth. Their startup company is called Bruxit. 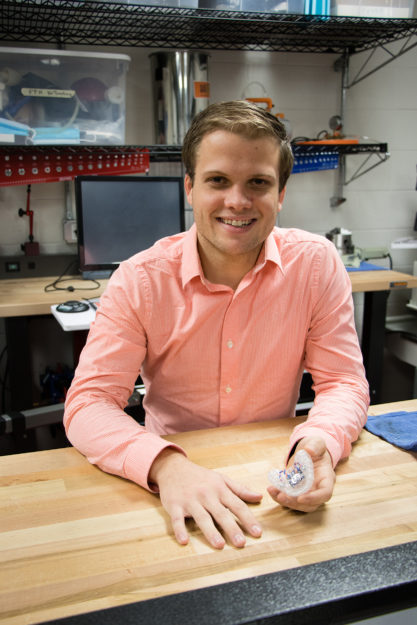 “Since we created the first circuit board we have been focused on scaling it down to make it possible to be put into the mouth,” Neuberger said.

They have come a long way since the beginning. What started as a proof of concept is now a scaled-down, working device. The team entered the idea into Bench to Bedside, a medical innovation competition at the U, in 2017 and again in 2018. They also have received a $1,500 Get Seeded grant from the Lassonde Entrepreneur Institute and placed in the top-10 in the U’s Opportunity Quest Competition in 2018.

“We felt good as a team and built solid friendships, and we wanted to keep working together,” Neuberger said.

Now, the team is working toward a clinical trial to show that the device can train people to stop grinding their teeth. Then, they hope to start selling the device and eventually add features like Bluetooth connectivity and an app to record the frequency and pressure of the grinding.

“Within six months, we hope to have data that tells us how well the device works, and we’re hoping that it’s positive,” Neuberger said. “Then we plan to talk to venture capitalists and start to generate funding.”

Find this article and a lot more in the 2018 “Student Innovation @ the U” report. The publication is presented by the Lassonde Entrepreneur Institute to celebrate student innovators, change-makers and entrepreneurs.

One thought on “Bruxit: Gnash, Bzzzt”