Many people with Down syndrome suffer from a variety of sleeping disorders. Some of these disorders, such as sleep apnea, can disturb the lungs and aggravate — or cause — other health problems.

In some cases, patients refuse to wear their sleep oxygen therapy equipment. Many times, the equipment is as simple as a nasal cannula, a tube placed in the patient’s nostrils to increase airflow. This tubing can be uncomfortable, leading kids and adults to inadvertently remove it while sleeping.

Aaron Esplin, a sophomore in biomedical engineering at the U, first learned about the issue from a friend whose child has Down syndrome, a problem staying asleep at night, and a nasal cannula to increase oxygen concentration. As the restless nights worsened due to the boy waking up multiple times through each night, the family was running out of options.

Esplin and his brother, a recent graduate from the U’s biomedical engineering program, decided to team up on an idea: a gel memory foam pillow that facilitates oxygen distribution to the patient without them being aware that they are receiving treatment.

“We studied the sleeping environment and started prototyping,” he said. “We needed to create a design that could optimize oxygen concentration around the head for patients that refuse to wear a nasal cannula.”

After some trial and error, the Esplin brothers achieved the design they were looking for, and their friend’s child sleeps on a pillow that looks like a normal pillow but also receives his oxygen to get a good night’s sleep.

Since their first successful design, the brothers have produced three more pillows. Now, the pillow is patent-pending, with more iterations in the production pipeline. 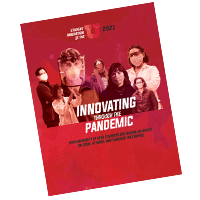