Jay Barney is a strategy scholar, presidential professor of strategic management, and the Lassonde chair in social entrepreneurship in the Department of Entrepreneurship & Strategy at the University of Utah’s David Eccles School of Business.

Barney is a global expert, receiving honorary doctorate degrees from the University of Lund in Sweden, the Copenhagen Business School and Universidad Pontificia Comillas in Spain, as well as visiting professor positions in New Zealand, the U.K. and China, and a visiting scholar at INSEAD and Oxford. A frequently published and cited academic with a Ph.D. from Yale and experience teaching at UCLA, Texas A&M and Ohio State, Barney’s research interests include competitive advantages and opportunity creation.

What’s your connection with entrepreneurship and strategy in general? What interests you about it?

Barney: My particular area of work is called “resource-based theory,” which focuses on the characteristics that enable firms to get competitive advantages. Entrepreneurship was always a secondary area for me, but then about 15 years ago I started working with a colleague, Sharon Alvarez, who is currently working at the University of Pittsburgh, to write a series of articles about the nature of entrepreneurial opportunities.

The prior work in the area had assumed that opportunities were these objective phenomena that existed independent of entrepreneurs, just waiting to be discovered – it’s called the discovery view. We thought that sounded a bit crazy: I’ve never seen an opportunity before, I can’t tell you what color they are, how big they are … so clearly they’re a social construct. Instead, we hypothesized that opportunities are in fact endogenous to entrepreneurs, that is, entrepreneurs create the opportunities that they end up exploiting. A lot of the curriculum that we developed here at the University of Utah is based on that distinction.

What drew you, then, to strategy and entrepreneurship?

Barney: Great question! And really, the same answer. There seemed to be opportunities to make some theoretical contributions. I started as a professor in 1980, well before many of you were born. Back then, the field of strategic management was very immature and fragmented and is now relatively mature. Entrepreneurship was very much the same: when we started working on this line of work, entrepreneurship was sort of a rag-tag collection of loosely joined ideas. Then, the idea that opportunity was central to the field of strategy was introduced and the discovery perspective was developed. That started bringing great rigor to the field, but we thought that discovery was the wrong theory. In both cases, it was that the field was very immature, and there was an opportunity to bring in more careful research to the field. 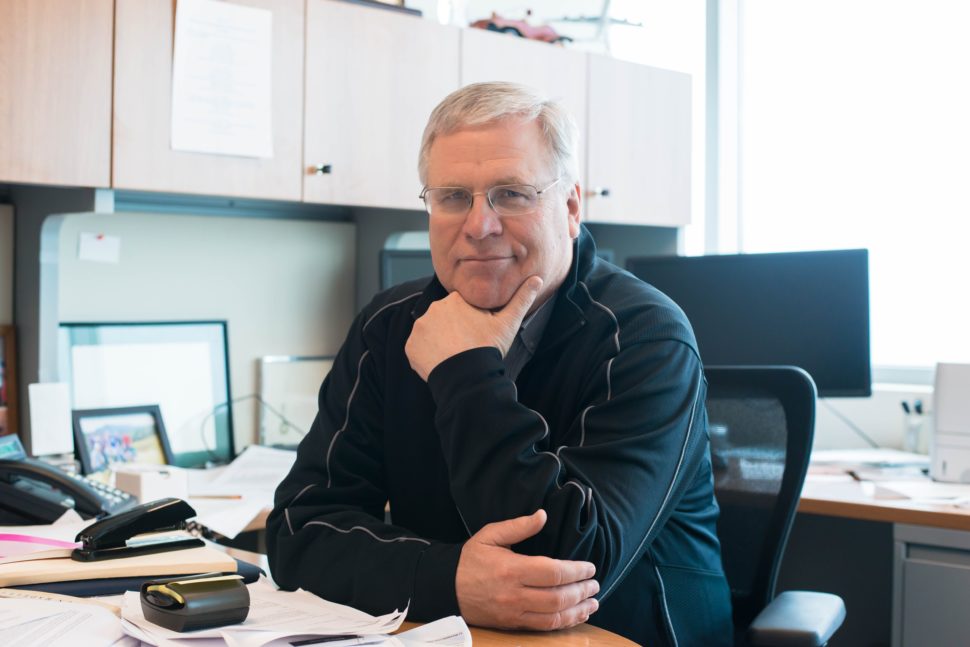 Jay Barney is a strategy scholar, presidential professor of strategic management, and the Lassonde chair in social entrepreneurship in the U’s Department of Entrepreneurship & Strategy.

So you created an opportunity and found a way to exploit it?

Barney: Yes! We did exactly what we said we should do, and it worked.

What is your definition of an entrepreneur then? Does it revolve around opportunity?

Barney: You can define entrepreneurship in ways that are extremely broad: for example, I’m an entrepreneur because I created these new theories, and other people say no, no – to be an entrepreneur you have to start a company, which doesn’t seem like a very high bar either. The field has basically stopped trying to say what an entrepreneur is generically.

There were two decades of trying to do that by the way, lots of literature on whether entrepreneurs were more risk-averse or risk-seeking, and the only systematic difference that’s been shown is that entrepreneurs do use cognitive biases more than non-entrepreneurs to make decisions: entrepreneurs are more willing than your typical manager in a large organization to generalize from small samples, and do so with great confidence. However, what we don’t know is, are those cognitive biases the cause of entrepreneurship, or the effect? We don’t know the answer – it’s clear that when you’re operating under conditions of uncertainty, where entrepreneurs typically operate, that if you wait to make decisions in ways that are consistent with traditional rational decision making, you’d be too late.

Is that your main research interest?

Barney: I’m still working on the distinction between discovery and creation. About the bias research, there’s a whole field on cognition in entrepreneurship that stems from a Ph.D. student who took his first seminar from me. The class required a five-page thought paper, and at page two and a half he wrote, “Maybe the difference between entrepreneurs and non-entrepreneurs doesn’t have to do with their personalities, maybe it has to do with the way they think.”

There’s decades of literature trying to find differences between those types of people, and they always focus on personality differences. He shifted the conversation from personality psychology to cognitive psychology, and no one had touched that before. I circled that sentence and wrote to the side, “This is a really good idea.” I crossed it out and wrote, “This is a dissertation,” crossed that out and wrote, “This is a career.” Now he’s a chaired professor at the University of Oklahoma based on the research he began.

So how are you applying these ideas in your current research into academics, into teaching and into classes here? How do you want your work to affect students at the U?

Barney: My primary entrepreneurship teaching here is in a class called “International Development and Entrepreneurship.” At spring break, we take the students to Peru, where we work with small companies, mostly in the villages, and their business ideas in a very intense five day period to collect data, analyze it, and present our findings.

About three years ago, our client was a cuy (guinea pig) cooperative. Cuy is a very important protein source in the Andes. Their business question was should they continue to buy cuy food from the local supplier, or should they make it themselves? This make or buy analysis takes five seconds in the U.S., where you would assume that cuy food is a commodity in a very competitive market, therefore there should be no reason to vertically integrate. But, it turns out that there’s only one cuy food supplier in Cuzco.

With that, the students had to consider how much it would cost to start cuy food production — how much would a new machine cost, etc.  The team put together a very thorough analysis, developed a model that said if the cooperative could put some of their own money into the machine, that a Kickstarter campaign could raise the rest of the money to purchase it, and their profits would increase 33 percent. These people were poor, living in homes with dirt floors, so when they saw that they could increase their profits by a third, and that they could keep their kids in school, pay the school fees and feed their family, they started to weep. The students and professors all started to cry. It turns out, we were wrong: it wasn’t a 33 percent increase in profits, it was more like 57 percent. This was the second largest cuy cooperative in Peru, and now it’s the largest. That’s the kind of thing we do in that class.

Is that your favorite class?

Barney: Well, I teach a lot of other classes, too, that are quite different, much more math and balance sheets. I’m passionate, but in a different way about these things.

Barney: I think that practice is a very expensive way to learn. The reason that we have classes is because we, as professors, do know some things, and it would be a mistake to not share the information we have and instead say, “Just go out there and try!” Trying is emotionally, financially and socially expensive. We know a lot about entrepreneurship now, and we teach it. In the entrepreneurial finance class here, we first figure out what a cap table is. Students ask, “What is a cap table?” and that’s why we’re in the class. We have to figure out that kind of stuff, because all decisions made at point zero effect the end result. Let’s not figure out that we need a cap table at the end of our first entrepreneurial effort, let’s do that early on.

How are these points relatable or important to non-business students?