This year, the University of Utah’s Lassonde Entrepreneur Institute is celebrating its 20th anniversary and everything it has accomplished. In that time, it has gone from an idea to a nationally ranked top-10 program that works with thousands of students and hundreds of student startup teams every year.

While a lot has changed since the institute started as one program in 2001, at least two things haven’t.

The first is its mission to provide students with transformative experiences through entrepreneurship. The second is the inspiration and commitment of founder Pierre Lassonde.

He and the Lassonde Family Foundation have supported the institute from the beginning and have now donated more than $26 million to grow the institute and help students launch companies, their futures, and learn by doing. All of the donations have been given to support student-focused programs that are provided for students, by students and three endowed presidential chairs.

“Pierre Lassonde has been visionary in his support of the institute and all of the students we have reached in the last two decades,” said Troy D’Ambrosio, executive director of the institute and an assistant dean at the David Eccles School of Business. “We would not be what we are today without his belief in what students can do with support and encouragement. We have launched hundreds of startups. We also have launched thousands of student futures. They are applying the lessons they have learned in our many programs through their many diverse careers and pursuits.”

With support from Pierre Lassonde and many other alumni, community members and businesses, the institute is now a world-renowned, interdisciplinary division of the Eccles School. Among other highlights, it offers many extracurricular programs for students across campus and beyond, provides thousands of dollars in grants for startups annually, offers thousands of dollars in scholarships to student leaders annually, and manages Lassonde Studios, a world-class facility for student entrepreneurship and innovation.

While the Lassonde Entrepreneur Institute once looked to other schools for inspiration, it is now leading the way for many other institutes, centers, and universities as it continues to introduce new programs and opportunities. Hundreds of people and organizations from around the world have visited to learn how it inspires students to pursue their entrepreneurial dreams.

“We have quickly become a top-10 program for entrepreneurship, and we look forward to becoming recognized as the best school anywhere for students to learn entrepreneurship and launch companies,” Pierre Lassonde said. “Our students have already accomplished more than we ever imagined.” 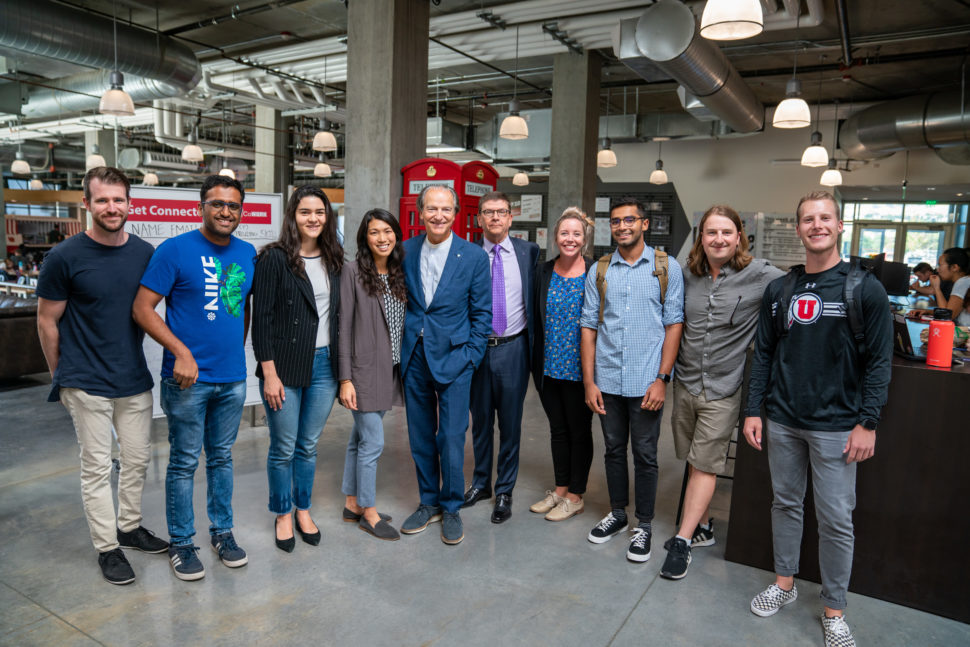 Before the institute was even an idea, Pierre Lassonde and his late wife Claudette MacKay-Lassonde arrived in Salt Lake City from Canada in 1971. He pursued an MBA and she a master’s degree in nuclear engineering. They graduated two years later, and the time they spent here helped them both achieve success. He went on to found the Franco-Nevada Mining Corporation and she to become a leading Canadian engineer.

After his wife passed away, Pierre Lassonde wanted to recognize her and their time at the University of Utah with a new initiative that would bring together business and engineering students. That effort led to an initial donation and the creation of the Pierre and Claudette MacKay Lassonde New Venture Development Center. It still exists today and pairs graduate students with scientists and entrepreneurs who need help developing a business strategy.

“I always say when you don’t know what you’re doing to start small and start short-term,” Pierre Lassonde said. “So, we started with just a few students and a couple projects with hope that we would be successful, and we were. The students proved they could do great work and contribute to an early stage company while also learning valuable lessons themselves.”

The Pierre Lassonde Entrepreneur Center provided business plan competitions on top of the graduate program it was already offering. It also gained a new home after remodeling a historic building in the Fort Douglas neighborhood of the University of Utah campus.

The center continued to slowly add more programs and reach more students. New programs added in this period included Bench to Bedside, a medical innovation competition, and Get Seeded, a milestone grant program for students to test their business ideas.

“After the first 10 years, we met with Pierre to discuss what we had accomplished, and he challenged us to do more and come up with an idea to bring the program to the next level,” D’Ambrosio said. “It took us many discussions and iterations, but we eventually came up with an idea that had never been done anywhere, that would make our program unique in the world. That idea was for a building where students could live, create, and launch companies 24-7.”

A group including D’Ambrosio and former David Eccles School of Business Dean Taylor Randall – who is now the president of the University of Utah – presented the idea for what became Lassonde Studios to Pierre Lassonde. He recognized its potential to help the program have an even bigger impact and agreed to donate another $12 million to help fund the new facility and elevate the center to an institute. The gift was announced in 2014, and the center became the “Lassonde Entrepreneur Institute.” 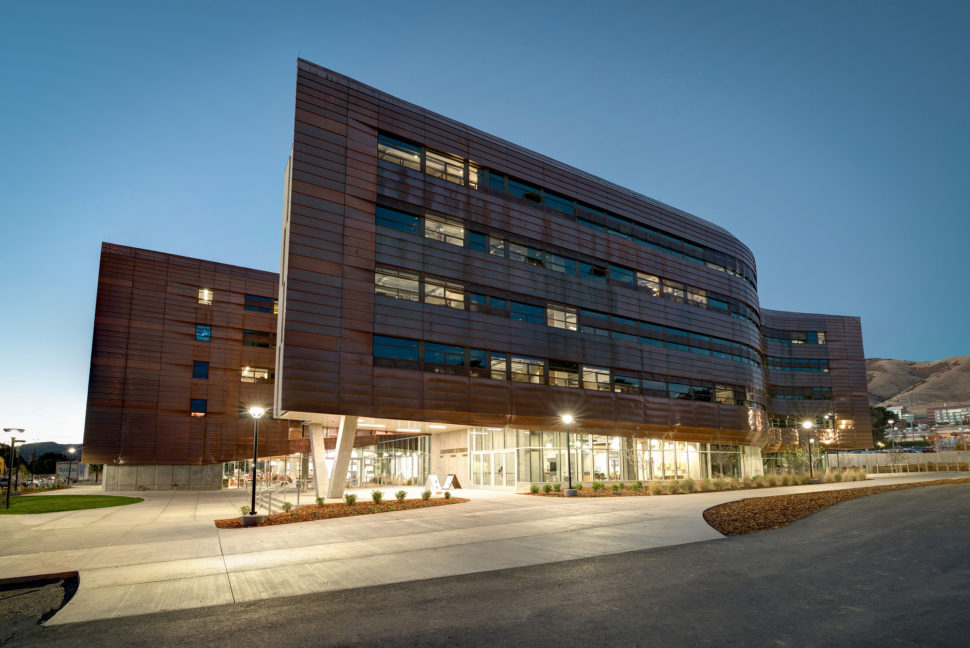 From the beginning, the idea for Lassonde Studios was very unique. No one else had tried to build something like it to the same scale or with the same mission. It would become a one-of-a-kind facility and residence for aspiring entrepreneurs.

Pierre Lassonde and the Lassonde Entrepreneur Institute broke ground on Lassonde Studios in 2014. The building would be the place for all students on campus to “live, create, launch,” and the scale was huge. The building would be 160,000 square feet, including a 20,000-square-foot innovation space on the first floor and four levels of residential space above. In addition, it would sit in the center of campus and be covered in copper to draw students from across campus.

“Our goal is to provide the best student experience possible, and Lassonde Studios is helping us do that by giving our student entrepreneurs and innovators the space and resources they need to pursue their ideas, meet each other, and learn by doing,” Randall said. “The building has attracted worldwide attention, but what is more important are the thousands of students who are living and working here and getting an experience of a lifetime. They are launching more than companies here. They are launching their futures.”

In anticipation of the growth expected with the opening of Lassonde Studios in 2016, the institute added many new programs and activities. Those included the Make Program, the Hours with Experts mentor program, Workshops, Food Entrepreneur, and Arts Entrepreneur. It also added the High School Utah Entrepreneur Challenge to help inspire students to pursue entrepreneurship.

After the first year in Lassonde Studios, the effort proved to be a success, as a record number of students engaged in Lassonde programs, hundreds of student startup teams received support, and the building continued to receive international attention from The New York Times, Architectural Digest, Bloomberg Businessweek, and other media outlets.

Like any comparable effort, the Lassonde Entrepreneur Institute grew thanks to more than just a few people. Beyond Pierre Lassonde, the institute has received support from numerous advocates, donors, alumni, and community members.

Executive Director D’Ambrosio has been instrumental in guiding the institute through many evolutions and continues to lead the program today. Former Eccles School deans Jack Brittain and Randall have advocated for the program and made it possible. Former University of Utah presidents Michael Young, David Pershing, and Ruth Watkins have given critical support.

Other donors have been generous in their support. Zions Bank and its President and CEO Scott Anderson have been among the most gracious. The bank has been the lead sponsor for the institute’s business competitions since the beginning and continues to support these efforts. The long list of donors also includes the Larry H. & Gail Miller Family Foundation, David Neeleman, and many more.

“Thank you to all of our donors, supporters, and volunteers who have believed in our mission and make our work possible,” D’Ambrosio said. “We would not be here today without you.” 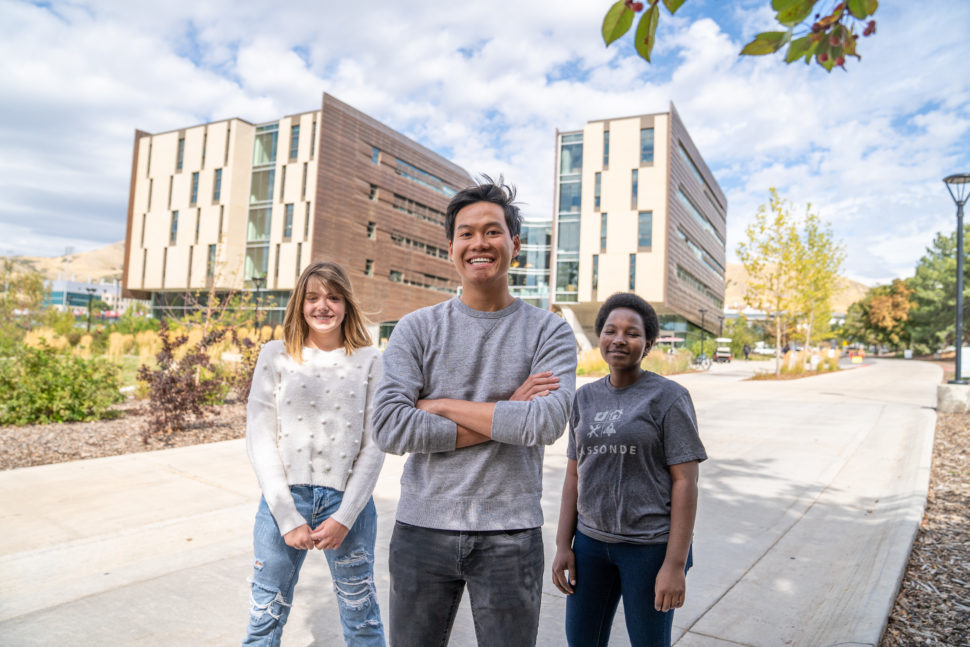 With so much behind it, the Lassonde Entrepreneur Institute still expects to continue to grow and improve in the years ahead. Among other goals, it hopes to grow from a top-10 program to being recognized as the best program for aspiring entrepreneurs.

The institute already has made steps in this direction with the addition of several new programs and more improvements on the way.

In partnership with the Department of Entrepreneurship & Strategy at the Eccles School, the institute launched several new academic programs that are providing even more depth to the student experience. Those include Lassonde+X, a three-course program for undergraduate students; Lassonde Founders, a residential scholarship program for undergraduates; and the Master of Business Creation, a nine-month program for founders to launch and scale their companies.

Beyond these programs, the institute will continue to pivot and adapt to meet the needs of its students. The only certainty is that these needs will change, and the Lassonde Entrepreneur Institute will change with them as it continues to fulfill its mission to inspire the next generation of entrepreneurs, creators, and leaders.

Pierre Lassonde said, “I can’t wait to see what our students can accomplish in the next 20 years. Judging by the first two decades, we have a lot to look forward to. We are just getting started.”

Learn more about the Lassonde 20th anniversary, history, and celebrations at lassonde.utah.edu/20years.

The Lassonde Entrepreneur Institute is planning a series of events for alumni and the general public to celebrate its 20th anniversary. Register for all these events and find more information at lassonde.utah.edu/20years. Here are the planned events:

Here are a few highlights from the Lassonde Entrepreneur Institute history:

The Lassonde Entrepreneur Institute is a nationally ranked hub for student entrepreneurship and innovation at the University of Utah and an interdisciplinary division of the David Eccles School of Business. The first programs were offered in 2001, through the vision and support of Pierre Lassonde, an alumnus of the Eccles School and successful mining entrepreneur. The institute now provides opportunities for thousands of students to learn about entrepreneurship and innovation. Programs include workshops, networking events, business-plan competitions, startup support, innovation programs, graduate seminars, scholarships, community outreach and more. All programs are open to students from any academic major or background. The Lassonde Institute also manages Lassonde Studios, a five-story innovation space and housing facility for all students. Learn more at lassonde.utah.edu.