Make a picture. Tell a story. Sell a product. Sometimes, it takes a near-death experience to realize what you live for – and for Isaac Griffin, that is creating art. His creative works all incorporate a unique sense of movement and storytelling. An avid cyclist, illustrator and art director at AdThing, a student-powered ad agency, and junior majoring in marketing with a minor in drawing, Griffin was badly injured when a car almost collided with him in September, 2016. The accident destroyed his road bike and left him with fractured hands and a severed finger. But four months later, he has a tenacity about him. He said how breaking his hands had changed his perspective, and how the Lassonde Entrepreneur Institute and residential community at Lassonde Studios supported him through his journey back to doing what he loves.

Griffin grew up around creativity and business: his late father received his fine arts degree at the University of Utah and worked as a concept artist and 3-D modeler, while his mother works in business. Griffin sees himself as a blend of both, drawing inspiration from science fiction, robots, comic strips, and concept artists like Aaron Beck. Originally interested in advertising, Griffin has become more interested in the independent design process; although he hasn’t launched a company of his own, he has realized that the Lassonde Institute doesn’t define entrepreneurism by products and ideas. Rather, it’s “more about having the spirit of an entrepreneur,” Griffin said. 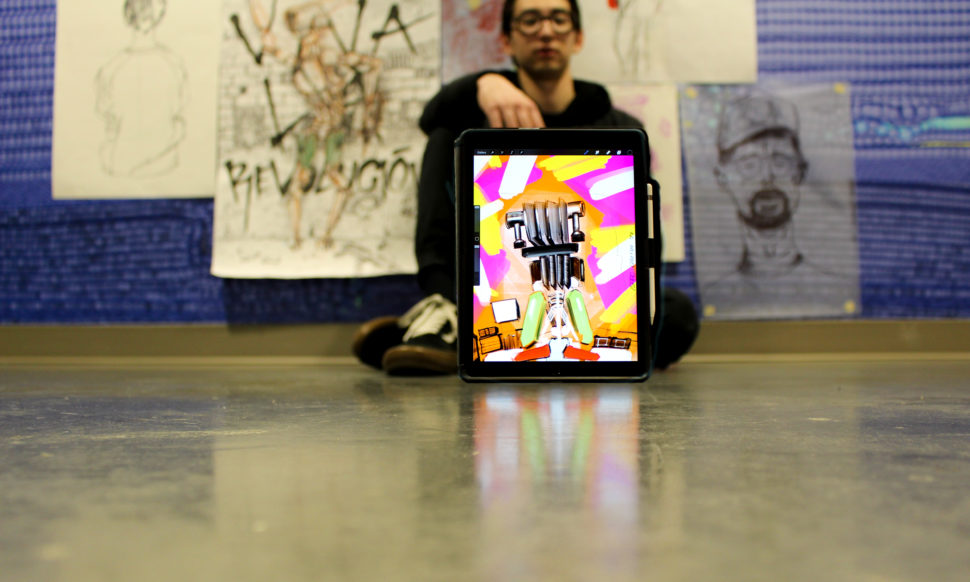 Isaac Griffin with his art at Lassonde Studios

It is this spirit that has driven Griffin closer to concept art, or art based loosely on constructs that will later form the bases for films. This kind of art provides him with the freedom to explore different techniques and color palettes, while evading any particular outcome expected. And while Griffin continues to create traditional and digital works, he has found that ultimately, the Lassonde Institute “is kind of like this think tank of knowledge and creativity” that provides him with an endless stream of inspiration.

With this opportunity to surround himself with people of diverse backgrounds and perspectives, Griffin has committed more time to bettering his craft, experimenting with a variety of mediums and subjects. That said, one of the most exciting realizations he has had during his time at Lassonde Studios is that “when you make stuff that’s rad enough, and you do enough of it, people see it and they pick up on that, and they want to be a part of this energy you create.” Griffin is looking forward to seeing where this year will take him and his art.