Bharath Velagapudi is finishing up his Ph.D. in biomedical engineering at the University of Utah. He is studying neural engineering and thought he was destined for a job as a researcher and professor.

But that was before he enrolled in the Pierre and Claudette Lassonde New Venture Development Center.

The technology commercialization program is provided by the Lassonde Entrepreneur Institute. It matches teams of graduate students like Velagapudi with faculty inventors, and the students spend a year developing a business strategy for the inventors.

The experience introduced Velagapudi to the world of consulting. He was drawn to the teamwork, excitement and opportunity to travel the world. “It really opened my eyes that there’s really a career for this type of work,” said Velagapudi, who grew up in Kansas and attended Case Western for his undergraduate degree.

Velagapudi is now about to launch a career in consulting. In fall 2017, he secured a job with The Boston Consulting Group and expects to start in spring 2018. The opportunity makes him one of very few U graduates to be hired directly out of school to one of the world’s biggest consulting companies. Other top firms include McKinsey & Company and Bain & Company.

He will be joining The Boston Consulting Group’s New Jersey office. He will be specializing in medical technology, working on interdisciplinary teams and traveling the world. Many consultants travel four days a week, Monday through Thursday.

Velagapudi is excited for the opportunity to continue the work he started while working in the New Venture Development Center. In his new role, he hopes to improve people’s lives by helping bring new technologies into the marketplace.

“What I look forward to most is definitely the impact,” he said. “As a consultant, you can really help a product get to market quickly. It can be achieved in a much tighter timeline than when working in a lab.” 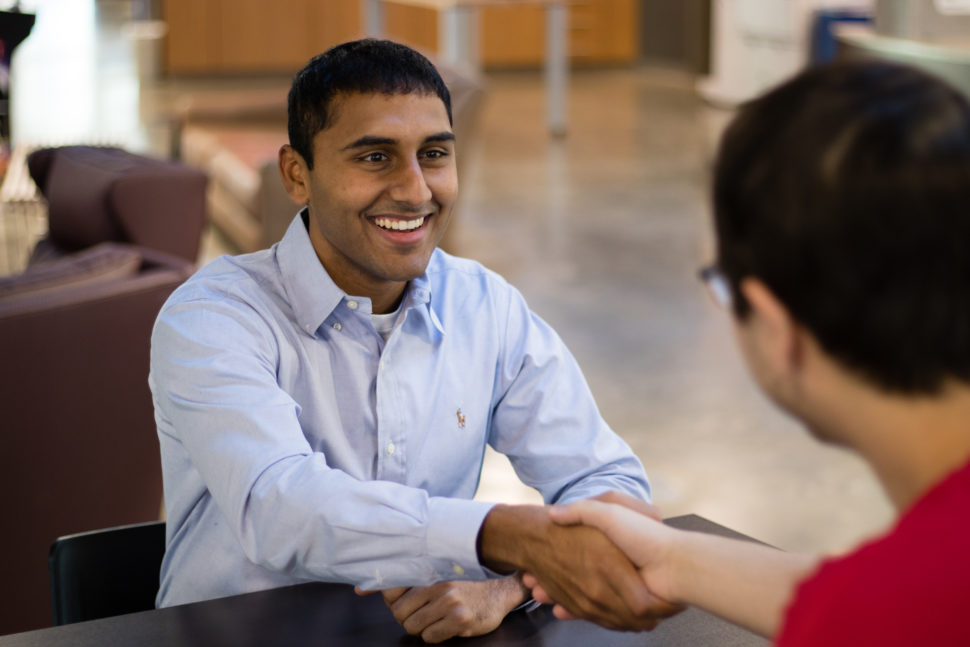 Bharath Velagapudi secured a job with The Boston Consulting Group.

When Velagapudi first came to the New Venture Development Center, he wanted to develop business skills, such as teamwork and time management, and he achieved that. He spent two years in the program – the first as an associate and the second as a student director.

“The most important thing I learned was the communication skills and how to work on interdisciplinary teams, and that what consulting is,” Velagapudi said.

While learning business skills in the New Venture Development Center, Velagapudi started to think that maybe he didn’t want to stay on the typical path for a Ph.D. student.

Once he set his mind to becoming a consultant, what made it possible was persistence and hard work. Knowing that it would be difficult to become a consultant at a top firm, Velagapudi went through dozens of resume drafts, talked to everyone he could and practiced every step of the application process.

“The University of Utah is not on their radar and these firms don’t recruit here,” he said. “You have to work extra hard to get your foot in the door.”