Have you ever considered where the sidewalk ends? Late poet Shel Silverstein did, but most other people don’t give it a second thought – except those who must navigate them with difficulty.

The Americans with Disabilities Act (ADA) was enacted in 1990 to protect those who are not able-bodied from various forms of discrimination. Some 27 years have passed since the ADA civil rights legislation was signed into law, yet there continue to be frequent building, pathway and parking violations that prevent equality for individuals who are physically disabled in some way.

Grant Acosta, a graduate student at the University of Utah pursuing his masters of information sciences and graduate certificate of business analytics at the David Eccles School of Business, was working his way through college as a bartender when he met Ron Johnson, a certified ADA inspection specialist and owner of ADA Inspection Plus LLC.

Acosta, an undergraduate student studying business with a minor in geographic information systems at the University of Redlands at the time, called the chance encounter a “happy coincidence” but one that would permanently influence his career outlook. Acosta had been talking about geolocation and mapping across the bar with another customer when Johnson happened to overhear the conversation. Intrigued, Johnson introduced himself to Acosta. 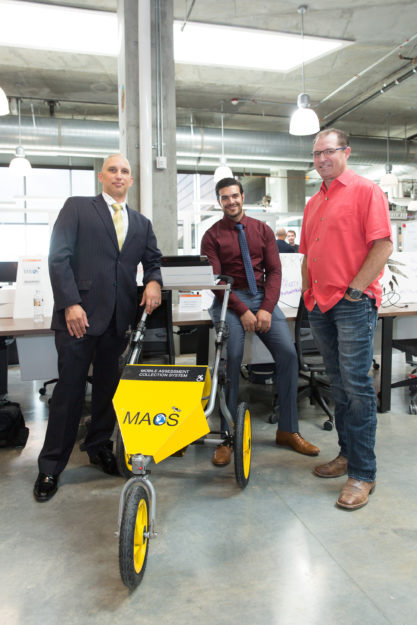 Johnson later asked Acosta about geotagging, leading to a serendipitous partnership that later evolved into a formal business partnership when the duo formed ADA Mobile Assessment Systems (ADAMAS) in May 2016 and applied to the Company Launch space at Lassonde Studios, a facility for student entrepreneurs managed by the Lassonde Entrepreneur Institute at the University of Utah.

At the time of their initial coincidental meeting, Acosta was working diligently on an independent project alongside colleague Michael Palermo to update the hand-drawn maps used by the Bisbee, Arizona, fire department from the 1940’s. Acosta saw huge potential impact in the creation of an accurate mapping geolocation system for the firefighters, as accurately mapped geolocations would improve emergency response time.

This interest in creating lasting impact in the community through the use of geotagging technology made Acosta a perfect match for Johnson’s idea of creating “a device that a trained person can actually use and collect the data” with for ADA property evaluations. These evaluations must be conducted on every building owned by large city agencies, universities and utility companies.

That said, ADAMAS will have even greater potential impact in public sidewalk domain, as “California alone has an estimated 220,000 miles of sidewalks left to inspect, not including ramps and or commercial properties,” Acosta said.

With the integration of geolocation information systems software with a unique internal instrumentation device, the mobile assessment prototype is expected to make these sorts of evaluations much faster, more accurate and cost-efficient.

The current industry standard for ADA violation evaluations is very costly, but company CEO Johnson and CTO Acosta estimate that the price will become significantly more affordable with the use of the ADAMAS prototype, especially considering that it will conduct evaluations 50-70 percent faster than the current methods.

In addition to filing an intellectual patent on the ADAMAS instrumentation design, Acosta said they have progressed through three iterations of prototype development in a remarkable six months thanks to the invaluable resources available at the Lassonde Institute, including grants made available through the Get Seeded program, support from the makerspace experts, and advice from Troy D’Ambrosio, executive director of the Lassonde Entrepreneur Institute.

Johnson, Acosta and COO Palermo plan on conducting field testing alongside traditional evaluation procedures this fall, anticipating the sole use of the prototype on evaluations by the end of 2017.