Working at ski shops while attending the U, Schaeffer Warnock and Jake Nelson couldn’t find a ski goggle that met their expectations. While the low-to-medium priced goggles decidedly underperformed, they found that even expensive goggles often had significant design weaknesses.

Their solution? Design their own. The result became Aura Optics, their goggle company, and the Nimbus, their first model. 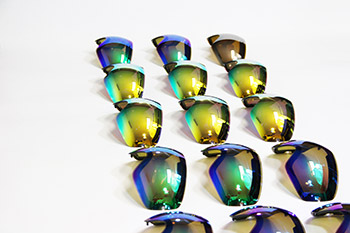 “As an avid skier,” Warnock says, “I noticed that there were not many options for customizing your snow goggles to your own tastes.” To achieve this, they created removable straps and lenses that can be easily interchanged, even while wearing gloves. “The result,” Nelson adds, “is a performance goggle in a stylish, customizable and aesthetically pleasing package.”

Warnock, an undergraduate in the David Eccles School of Business, saw a hole in the competitive goggle market. If the Nimbus could outperform premium goggles, yet sell for a lower price point, it could carve out a niche of its own. Nelson, a student in the U’s Multidisciplinary Design Program, helped engineer the Nimbus with attention to every detail.

The goggle rides high on the nose for easy breathability and is well vented. When these features combine with a double anti-fog treatment, the Nimbus remains clear under all conditions. Not content to stop with mere performance, however, Warnock and Nelson sought to enhance the aesthetics of the goggles. The lens hides the frame, creating a uniquely sheer appearance.

Already, Aura Optics has gained momentum: a Kickstarter crowdfunding campaign met its goal of $8,000 within 24 hours. Six days in, the amount more than doubled. Warnock and Nelson will use the funds for a first production round, to be ready before the 2014-2015 ski and snowboard season.

Aura Optics has also received help from the Lassonde Entrepreneur Institute at the U, getting a $2,500 grant from the Get Seeded program managed by the U’s Entrepreneur Club.

For the two entrepreneurs, the future looks as bright as a south-facing snowbank. Good thing they have goggles.