Want to verify your baby’s breathing at all times? You’ll need a device with wires, electrodes or other physical attachments to the child, said University of Utah bioengineering student Spencer Madsen. The Ph.D. candidate and new dad — with No. 2 on the way — set out to create a product that allows parents to keep tabs on their children’s respirations with no strings attached.

Madsen’s PlusOne Baby, a wireless, no-contact monitor, won the $15,000 grand prize at Monday’s Bench-to-Bedside competition, a University of Utah program sponsored by Zion’s Bank designed to not only introduce medical, engineering and business students to the world of medical device innovation but to help students start their own companies and take their inventions to market.

Bench-to-Bedside is managed by the U’s Center for Medical Innovation in partnership with the Lassonde Entrepreneur Institute and the College of Engineering.

“As a first-time parent, you want everything to protect your child, but you need things that are reasonable, and you can’t attach stuff to your children because it increases the risk of strangulation,” said Madsen, moments after collecting his oversized check at the Utah State Capitol. “PlusOne Baby is a safety net of sorts. It’s always running, so, hopefully, it’ll have the ability to prevent issues with children, and you’ll have a fighting chance as a parent to prevent death.” 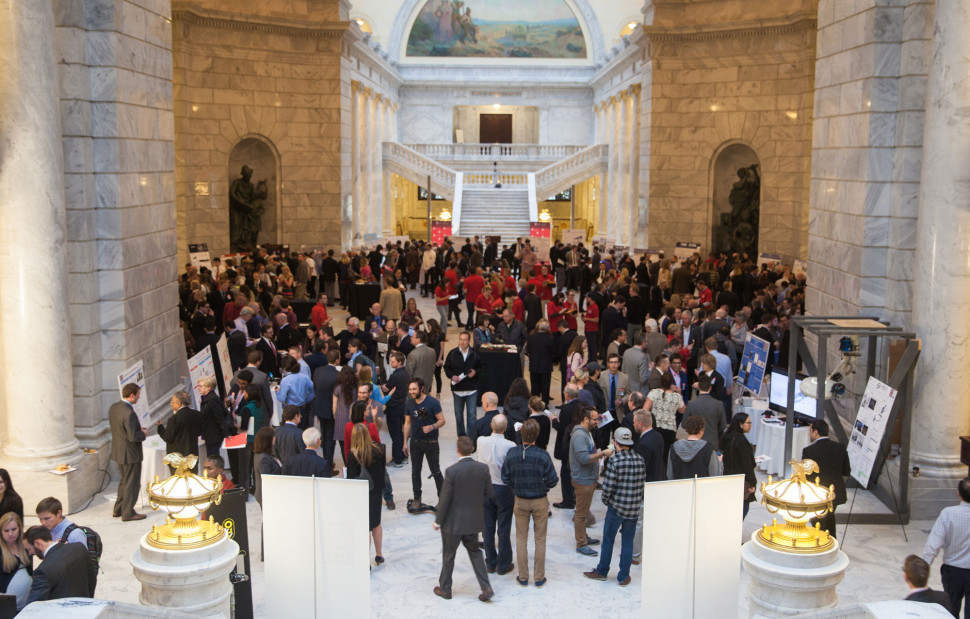 Next up for Madsen is an institutional review board study. If the device proves to be as effective on real children as he believes it is, he’ll work on “pushing it to the masses.” He may try a crowd-funding campaign in an effort to get it into as many homes as possible. Madsen’s ultimate goal is gaining a contract with retail outlets or a licensing agreement with an already established company. The prize money gives him a boost in that direction.

“I just feel grateful that people believe in this project as much as I do,” Madsen. “With this award, [PlusOne Baby] is one step closer to actually helping babies and, hopefully, giving parents the peace of mind that they need.”

Bench-to-Bedside is a collaborative program, and Madsen is a rare team of one, although he didn’t do it alone. Faculty mentors helped him along the way. Madsen said he wasn’t sure how his product would be received on competition night — he was hoping for one of the smaller awards — but positive feedback gave him confidence.

“Pediatricians are normally naysayers when it comes to new products, but a pediatrician I talked with thought it was pretty cool,” Madsen said. “She was like, ‘This seems totally different than anything else. It has potential.’”

Other winners at the Bench-to-Bedside competition: