Inspiration can come from anywhere or anyone, and for Britton Winterrose, it all began because he and his family realized they were not eating healthy. “I had this epiphany where tons of people go through this everyday,” Winterrose said. Beyond making more healthy food, he asked himself, “Can we create something that will let us choose and start cooking a meal from anywhere?”

Winterrose, Andrzej Forys and Chris Ivie are the cofounders of the company Botpot, with office space at Lassonde Studios. At a Campus Founders Fund event called Meet Your Cofounder, Winterrose and Forys ran into each other and connected instantly. “We always favored action over theory,” Winterrose said, “and results over planning.” Forys said, “I needed someone 110 percent into the startup!”  Having outpaced their previous cofounders from other start up companies, Winterrose and Forys bonded over their level of commitment to making a difference through the company. “It’s important to have something that you’re working towards that you really think is going to make a difference,” Winterrose said.

Forys is a graduate of the University of Utah working on a Ph.D., while Winterrose and Ivie are graduates of Brigham Young University, Hawaii.

Botpot is half refrigeration and half sous vide cooker, which is a method of cooking where the meal is wrapped in a vacuum-sealed plastic pouch that is then placed in a temperature-controlled water bath. There is a Wi-Fi connection from the Botpot to the Botpot App, which can be downloaded on any smartphone. “The top part refrigerates the food, and let’s you load up to four different meals,” Winterrose explained. “And then the bottom part has trap doors that are connected via Wi-Fi, and so you can view on the app what you have loaded, and tell it to start cooking no matter where you are.” It took some trial and error before they were able to actually cook for themselves using the Botpot, “It took us a whole day to build it, but we built it!,” Forys said. 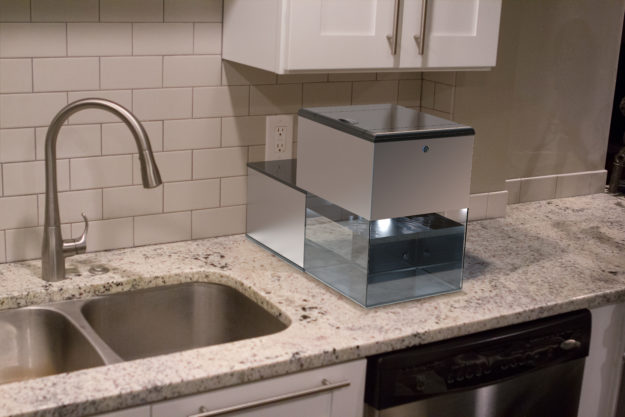 Botpot is half refrigeration and half sous vide cooker.

The Lassonde Entrepreneur Institute monthly grant program Get Seeded has allowed Botpot to gain funding and networking opportunities to gain the company momentum.  The grant program works through a selection process by judges who choose teams to advance to the final Get Seeded funding event.  From there, the teams are selected for funding based on an audience vote. Botpot has won the funding all four times that they have applied. “The recognition that comes with getting big checks and pictures up on Facebook is so valuable and super legit,” Winterrose said.

According to Forys, “We don’t want Botpot to be one of these small student startups. We want this to be an evolving company that creates multiple product lines and multiple smart devices that go into everybody’s kitchen that just make cooking so much easier!”  Winterrose and Forys are determined to help all households eat healthier and cook food easier by having Botpots in every kitchen for every family.