For a limited time, student startup company Foster the Children is selling their unique shirts at the University of Utah Campus Store.

The company sells shirts designed by children in foster care, and proceeds go back to help the community. The shirts at the Campus Store feature a hand-drawn block U logo. Buying and wearing the shirts is a way to show your Ute pride while also supporting foster children.

Cofounders of the company include Daniel Hirst, an electrical engineering student, Meghan Pollard, a marketing and entrepreneurship major, and Caden Gregorie, a marketing major.

“Selling in the campus store has been both a rewarding and enlightening experience for us,” Pollard said. “We love getting the opportunity to talk with more people about the importance of foster care, and as this has been our first time selling in a retail environment, we learned a lot.”

The shirts for sale at the Campus Store cost $34.95 for the long-sleeve version and $24.95 for the short sleeve. Foster the Children has already sold dozens of shirts and recently restocked their inventory. The shirts will be for sale there at least through October.

Foster the Children gives proceeds to partners including the First Star Academy Program and The Utah Foster Care Foundation.

The students came up with the idea for their company while in an Entrepreneurship 1010 class taught by Barclay Burns, a professor in the Department of Entrepreneurship & Strategy. They took the course through the Block U Program, which provides themed blocks of classes so undergraduates can complete their general education credits while also focusing on a specific topic. One of the topics is “Entrepreneurship & Society.”

Shortly after starting the company, the students were invited to attend a meeting about bringing an academic success program, First Star Academy Program, to the university. Hirst described the importance of this opportunity.

“This was extremely timely and has been instrumental in Foster the Children’s progress as a Benefit Corporation,” he said. “Being a part of the First Star advisory board has given us the opportunity to work more closely with the university and create this Ute themed shirt.” 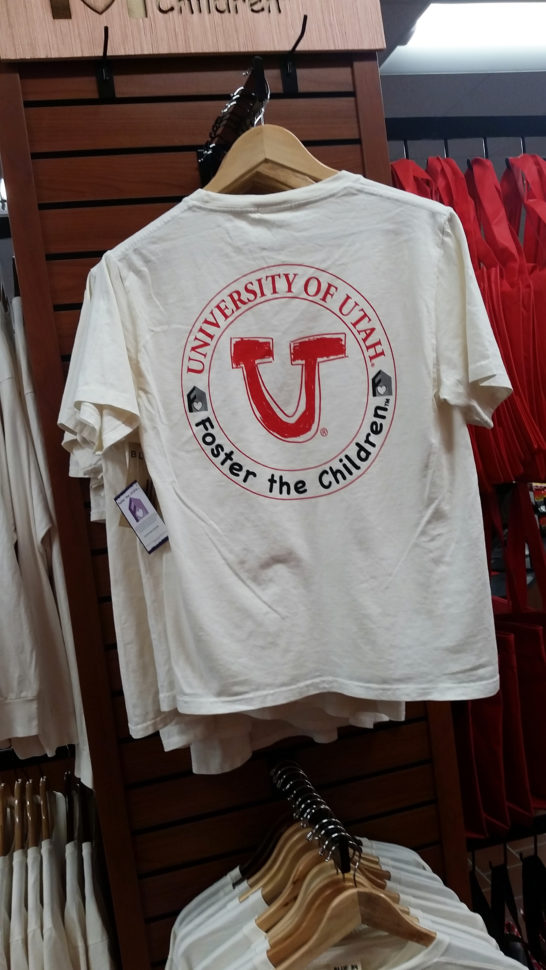 Foster the Children sells shirts designed by foster children. Proceeds go back to support the community.

Foster the Children has received a variety of support from the Lassonde Entrepreneur Institute, including office space and mentoring provided by the Company Launch program. That program is managed by Garrett Holm, a business student who described the company’s success.

“The progress made by Foster the Children is a great example of what can be done through teamwork and persistence,” Holm said. “I’m continually impressed by this team’s ability to utilize their individual strengths to accomplish their goals. Landing a spot in the Campus Store was a major accomplishment for Foster the Children, and it has inspired many other student entrepreneurs in the Lassonde Company Launch program.”

Many groups and individuals have helped Foster the Children, including: The Utah Foster Care Foundation, Mike Winder at Zions Bank, Alex Khan, Abby Hirshberg, Jim Sorenson, Richard Fairchild, Tracy Dawson at Blue84, Sandi Pershing, and Steve Borst along with the rest of the First Star Academy Program, and the Lassonde Entrepreneur Institute.

“Without the support we received from the University of Utah, and several individual departments on campus, Foster the Children wouldn’t exist,” Hirst said. “We owe a huge thanks to these many departments here at the university.”

Learn more about Foster the Children and the First Star Academy Program at fosterthechildren.org.