Born into a family of artists, Daisy Hall has always had an inherent passion for creativity. This, coupled with her love for fashion and unique expression, led this current Lassonde Studios resident and University of Utah freshman to begin creating her own individualized clothing pieces. What started with simple materials like fabric paint and secondhand clothing has now become Hall’s official introduction to the world of entrepreneurship: Dayzsy Customs.

“Dayzsy Customs is my company, made for customizing clothing, tote bags, shoes … whatever I can get my hands on,” Hall said. “I get clothing from secondhand stores and revamp them by painting or drawing on them.”

Dayzsy Customs wasn’t born as a business idea and was instead a simple hobby for Hall, in the beginning. Pieces she created were for her own use, until she began to pick up on a public desire for unique items like the ones she was wearing.

“I started customizing clothes and wearing them out, and I noticed that people were complimenting me on my outfits,” Hall said. “They would be like, ‘Where did you get this?,’ and I’d say, ‘I painted them!’ I realized that there was a market for people who wanted customized clothing. It was something. I enjoyed doing, and I thought it would be a great way to make some money.” 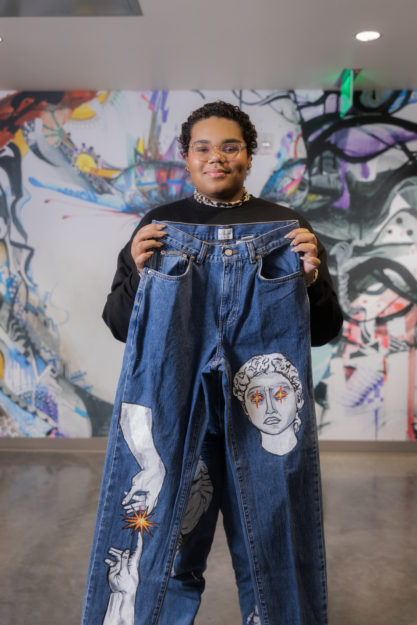 “I started customizing clothes and wearing them out, and I noticed that people were complimenting me on my outfits,” said Daisy Hall, founder of Dayzsy Customs.

Hall’s mission goes deeper than just creating new pieces, however, and she has made it her goal to help people gain confidence and individuality through their clothing.

“I think it can be hard to find clothes that are different and fit my own taste,” Hall said. “So many people want their own style and don’t know what to wear. I think giving unique pieces can give people confidence … it can be a conversation starter.”

Starting Dayzsy Customs has not been without its own set of challenges, and Hall was transparent in citing all the factors that made starting her own business difficult. From homing in on exactly what it was she wanted to be producing, to marketing and starting a website, Hall explained the several challenges she faced in the beginning and still does as her business grows.

With proper assistance and mentorship, challenges like those Hall discussed become much easier to overcome. Hall’s involvement with the Lassonde Founders program has provided just that: a community that fosters support and resources for all her entrepreneurial pursuits. Through “milestone meetings” with supervisors who help all Lassonde Founders with their ideas and connect them with other like-minded individuals, Hall described the bonds she’s already been able to create through her involvement.

“The Founders program has helped me grow my business by letting me bounce ideas off of them,” she said. “They’ve also helped me in starting my own website and given me people to connect with that wouldn’t have normally if I were trying to start this on my own.”

Hall’s knack for entrepreneurship has been something she’s been aware of for years, but she decided to pursue it as a potential career when she realized she had an idea worth investing in.

“If you have a good idea, you can be successful if you’re really passionate about whatever it is you’re doing,” Hall said. “Anyone in today’s world can start a business, and I think that’s super cool.”

Find out more about the Lassonde Founders program at lassonde.utah.edu/founders.

About the Author: Mary Allen