Finding the time to do laundry while living on campus is a common struggle for many college students. Foam is a student startup at the Lassonde Entrepreneur Institute with a goal to eliminate the challenges that come from doing laundry in a dormitory by offering a 24-hour turnaround service where students can have their laundry picked up, washed, and dropped off once a week for only $10 a week.

Carson Young started Foam as an independent project for an entrepreneurship class at the David Eccles School of Business. Young came up with the idea for this laundry service while visiting a friend who lived at Lassonde Studios offered to pay him to do their laundry. He realized how pervasive the dislike for laundry was among his friends and classmates, prompting Young to research the viability of an on-campus laundry service.

In January 2021, Young started to build his team, which now consists of him, Alex Wright (CMO), Kyle Bast (CIO), and Ethan Black (COO). They are all students at the U. Together, they entered and won a Get Seeded grant from Lassonde for their new business. They now have an office in Lassonde Studios as members of Company Launch.

“The network we have built because of our connections through Lassonde has really helped us take Foam to the next level,” said Young, a finance major at the David Eccles School of Business.

The Foam team believes that the dedicated space has increased their productivity and collaboration. Additionally, they have been working with the Make Space at Lassonde Studios to help with public relations materials. Young attributes Foam’s networking success to these programs, which he was exposed to while living at Lassonde Studios his freshman year.

As a young entrepreneur, Young said that his biggest challenge so far has been learning how to manage others. Maintaining professionalism while also remaining friends with his team has become a new skill that he has grown through Foam. “Making that distinction between friendship and work relationships has been difficult, but much easier to navigate now that we have the office space,” he said. “We can divide work easier and stay accountable by always having someone in our office everyday.”

Foam is planning for a full launch at the University of Utah in fall 2021. They are hoping to move to other campuses in and outside of Utah depending on the success that they see at the U.

Only 18% of the U’s students live on campus, so Foam believes that if they can become viable with such a slim margin of residents that they will be able to be successful on just about any other campus. Foam also wants to build a larger marketplace for cleaning in the next few years by offering more services like general tidying and sneaker cleaning.

The Foam team believes their model of creating a service by students, for students will not only attract customers, but part-time employees. Foam’s current primary goal is to be included as an optional service at the University of Utah’s dorms that can be opted-in on the residential services forms.

For more information about Foam go to: foamlaundry.co. 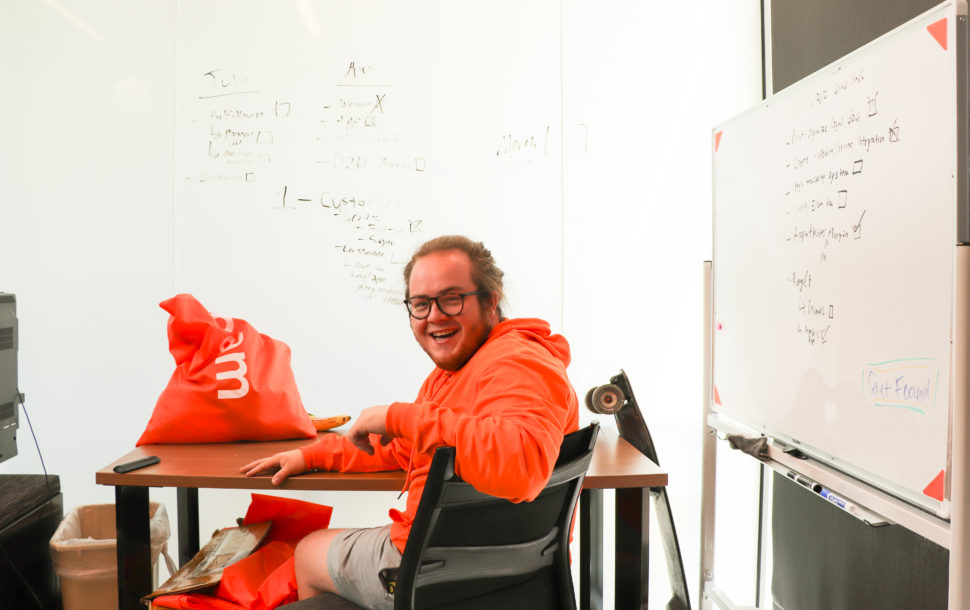 Foam founder Carson Young in his office at Lassonde Studios.

About the Author: Julia Dominesey