In spring, 2015, the Lassonde Institute hosted a private audition for ABC’s “Shark Tank.” We invited all U students, faculty, staff and alumni to participate, and we were overwhelmed by the turnout. As we hoped, some of those teams are now appearing on the program. Below is a Q&A with the co-founder one of these teams, InstaFire, Konnel Banner. They lit more than fires at our audition with their fire-starting technology; they lit our imaginations and excitement. They did the same thing on the “Shark Tank” episode that aired Feb. 21. The Riverdale-based company secured $300,000 for 30 percent of their business. Watch the episode here.

A second company that auditioned at the University of Utah, Beloved Shirts will also be appearing on “Shark Tank.” The company sells custom-designed shirts and clothing. That episode appears this Friday, March 11. Get more information on the “Shark Tank” website.

Who’s on the Instafire team?

The InstaFire founders are me, Konel Banner, and my partner Frank Weston (both Frank and his wife, Alisha, worked for University of Utah Health Sciences). We have over 40 years of combined business and outdoor experience and are the leaders of fire starting technology. We developed the patented technology that exists with InstaFire. I am an outdoor enthusiast and with over 30 years of Scouting experience. I am also a dutch-oven culinary expert. Weston spent countless hours co-developing the patented technology. He is an avid sportsman, hunter, fisherman and outdoorsman and served seven years on the Meadowville Volunteer Fire Department. This experience with fire and outdoors brings with it his unique understanding of both the danger and need for fire. 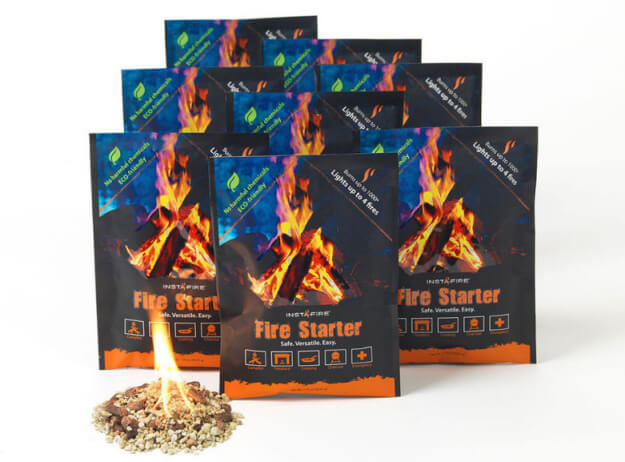 What’s InstaFire, and how did you get started?

My sister Kim and family were in the Teton Idaho Dam flood and was on the reported-missing list for nearly a week. I was also able to go work and help clean up and witness first-hand families who had lost everything. Later in my life, I traveled to see the aftermath of hurricane Katrina. These two events have shaped my perspective on being prepared for emergencies.

In the fall of 2007, during a mountain man rendezvous in Ogden, I was intrigued by an elderly man lighting a rock on fire. How was this possible? Could a rock actually burn? How was this rock so light that it actually floats? How could it burn right on the snow or ice and in the rain?  The discovery of this unique rock and its properties was the beginning of something fun. With the prior events still engraved in mind, I saw an opportunity to develop a safe way to store emergency fuel/fire starter.

In the fall of 2008, I met Weston though a mutual acquaintance. A friendship soon developed and a new company formed. For the next nine months, in the early morning hours, we worked in an abandoned, owl-infested warehouse to perfect the formula that now exists with InstaFire. It had to meet certain criteria:

We have accomplished just that – in fact our company slogan is: “Safe. Simple. Versatile.”

How did you make it onto “Shark Tank?”

In February, 2015, we were invited and then participated in an open audition for “Shark Tank” at the University of Utah.  We understand that we didn’t invent fire, but we were thrilled for the opportunity to show off how we have mastered the art of making fire. We demonstrated InstaFire’s unique insulating quality by burning it right in our hand. Then we showed how water resistant it is by letting it float and burn right on water. That must have made for a nice visual.

What was it like to be on “Shark Tank,” and how did it go?

“Shark Tank” was an amazing experience, from our first audition at the University of Utah to the many cuts and final presentation which aired on Feb. 21, 2016. We were thrilled to have four sharks give us offers and fight over us. We decided to partner with Mark Cuban and Lori Greiner.

In what shape was your company before “Shark Tank?” How has it helped so far?

Before “Shark Tank,” InstaFire was a successful small company but very few people knew what it is or does. We just aired, so it is hard to know for sure what the long term effect will be but we anticipate to 3-4 times sales this year over last.

What’s next for InstaFire?

We are preparing to show InstaFire on QVC within the next couple of months and are currently attending several trade shows. We are now currently selling our all natural fire starter and charcoal starter in some of the largest retailers, such as Home Depot, Walmart and Target. We are also selling through some of the premier food storage companies like Wise Foods and Emergency Essentials.

What sort of lessons have you learned that might help other entrepreneurs?

One of our most motivational moments was when a man, who wanted to have us sell exclusively through him, told us, “You could never make it on our own.” That has kept us going even when things got hard. We have learned to just try to improve a little bit each day and never sacrifice quality.

We want the camping, hunting or grilling experience to be a great one to bring families together. By taking the often times frustration out of starting a fire or lighting charcoal in virtually any condition including rain, snow and high winds, we help promote great memories.

We have also received three emails over that past few years telling us that InstaFire saved their lives, all three in blizzards conditions that were able to start a fire with InstaFire.

Learn more about the company at instafire.com.