University of Utah biomedical engineering students Lauren Slattery, Emma Slominski, Robert Falconer, and Catie Augustine put the L-E-R-C into LERC Medical. The first letters of their names form the name of the company they formed to support the realization of their prototype of a dual-function esophageal probe.

Esophageal probes are long probes inserted through the esophagus of a patient under general anesthesia to monitor core body temperature during surgery. LERC Medical developed a dual-function esophageal probe, meaning it measures both core body temperature and oxygen saturation. Both of these measurements are necessary to determine a patient’s stability during surgery.

Currently, to monitor these vitals, two separate devices are necessary. “We wanted to simplify the number of devices needed during a surgery,” Augustine said. “So, we developed a prototype with sensors that are currently available, and threaded them to create a bifurcated mature.” Not only could this new probe reduce the cost incurred by the devices needed during a surgery, but it also reduces the clutter in the surgery theater.

Each member of LERC chose to work on this project for their bio-innovation track during their time studying biomedical engineering at the University of Utah. “I chose this project because I knew it would be a challenge incorporating the electric components, and I was curious as to how it would work and wanted to explore it” Slominski said.

While in this course, LERC won the $20,000 grant prize in the 2022 Bench to Bedside medical innovation competition managed by the Center for Medical Innovation and the Lassonde Entrepreneur Institute. They are using the money to advancing their provisional patent to a utility patent and filing as a limited liability corporation (LLC). 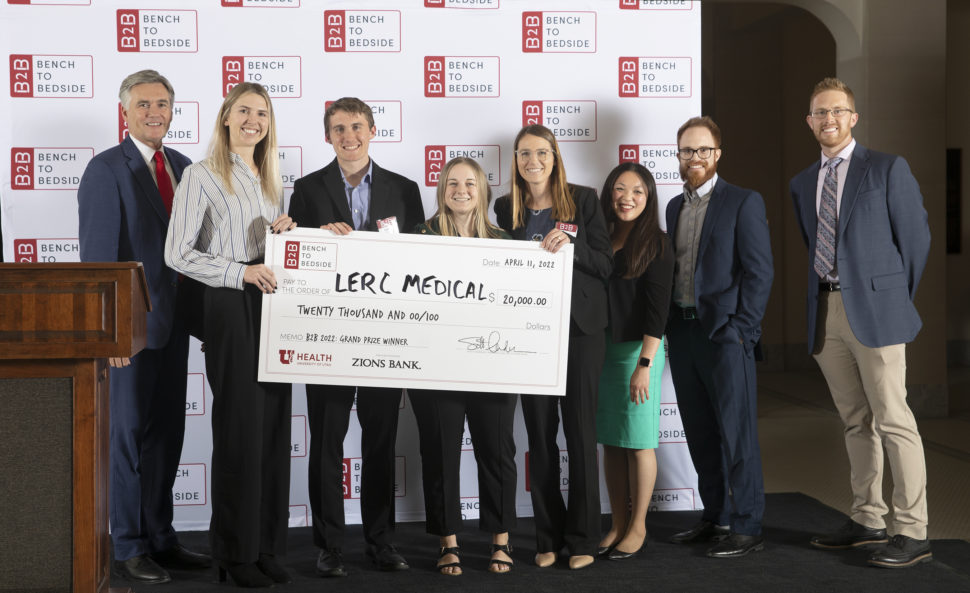 LERC Medical at the 2022 Bench to Bedside final event.

Augustine compared her classwork and experience with LERC Medical. “LERC has been one of the best experiences I’ve had for what real life engineering is going to be like — to understand where I want to be in industry and what I want to do,” she said

“Bench to Bedside helped us get our business side together,” she added, explaining the advantages of participating in the competition “We hadn’t thought too much beyond marketing requirements or how to get the device to market. I helped us think about the requirements needed to start a business and what team members we will need going forward.”

Slattery emphasized how after their experience with Bench to Bedside, the team realized what a great impact they could have on the medical community by pursuing LERC further. All helped develop the device, but on the business side, Falconer and Slattery focus on filing for patents and creating their LLC, while Slominski and Augustine control the logistics and manufacturing. Falconer and Slattery are still at the University of Utah, pursuing a Ph.D. and residency master’s in biomedical engineering, respectively. As Slominski and Augustine take on full-time jobs, they hope to develop LERC medical as an acquirable passion project.

When asked what advice she would give to others interested in bioengineering or medical innovation, Augustine said, “Even if your prototype isn’t ready, still apply to Bench to Bedside, there’s literally no cons to doing it.”

About the Author: Julia Dominesey