In late 2015 Daniel Riley posted a YouTube video of his scratch-built 1,000 watt LED flashlight. Within four days of being posted the video accumulated over 3 million views. “This proves there’s a big market out there for ultra bright LED lighting systems,” said Riley, a senior in the bachelor of University Studies program at the U. He decided to go after this market by starting Stratus LEDs, a company that designs, manufactures and sells multipurpose high power lighting systems.

Stratus LEDs core product is their 100 watt LED Module. These can be used individually as small and portable lights, or grouped together to form a blindingly bright light bars. “The applications for these lights are endless,” Riley said. “We’ve currently narrowed down our marketing efforts to target the film industry, the off-road vehicle industry and hobbiests.” The LED modules can be thought of as the core building block for DIY high power lighting systems.

During the past winter Riley put the prototype light systems to the ultimate test by using them to film backcountry snowboarding at night in blizzard conditions. “As far as I know, this is the only lighting system of comparable brightness that is small and light enough to be carried by hand into remote locations,” he said. “It’s a real game changer for action sports filmmaking at night.”

“We’re guessing our lights will be most popular amongst low- and mid-budget filmmakers,” Riley said. “The individual 100 watt LED modules will cost $49 each and be equally as bright as film lights in the $400 to $500 range. Our 10 module lightbar will produce as much light as a traditional 7,000 watt film lights and cost a fraction of the price.” With a light this bright you can light up the side of a mountain from 1,000 feet away. 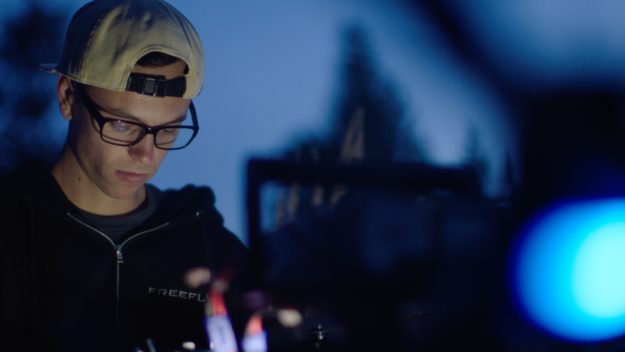 In addition to ground-based lighting systems, Stratus LEDs has also pioneered drone lighting. In 2016 Riley posted a YouTube video he made of his Freefly Alta drone carrying the same 1,000 watt light that was seen in his first viral video. “This sparked a lot of interest in the film industry,” he said. “I was getting contacted almost every day by directors and producers wanting to hire my drone lighting services for music videos and feature films. One of the most notable projects we worked on was a music video for Elliot Moss’s new song – Closedloop. It was shot in various locations around Utah during December of 2016.” The full video can be seen here. The behind the scenes video can be seen here.

“I’m looking forward to seeing how the next few months will go,” Riley said. “There has been a ton of interest in our products and I’m confident we’ll be able to sell a lot of systems.”