When I was in Logan last year my friends and I went to a place called The Crepery, where they sell, what else, crepes. It took us a long time to get a crepe because people love them! There were people always there! When coming up with a business idea, I thought, “Why not sell crepes since they were so popular up in Logan?!”

On Sept. 1 of this year, I went to the SUU vs. Utah football game on a date, and because I was hungry, my date and I went to go get food inside the stadium. There were several food trucks and concession stands but the lines everywhere were so long! We stood in the Cupbop line, which had about 50 to a 100 people in it, but the line was going nowhere. Not only we were missing the game, but Utah Fans, and members of the MUSS were missing the game. This is another reason why I want to start a food cart business. With another food option at football games and events, the lines won’t be as bad, people won’t be as hungry as long, and people won’t miss as much of the game. 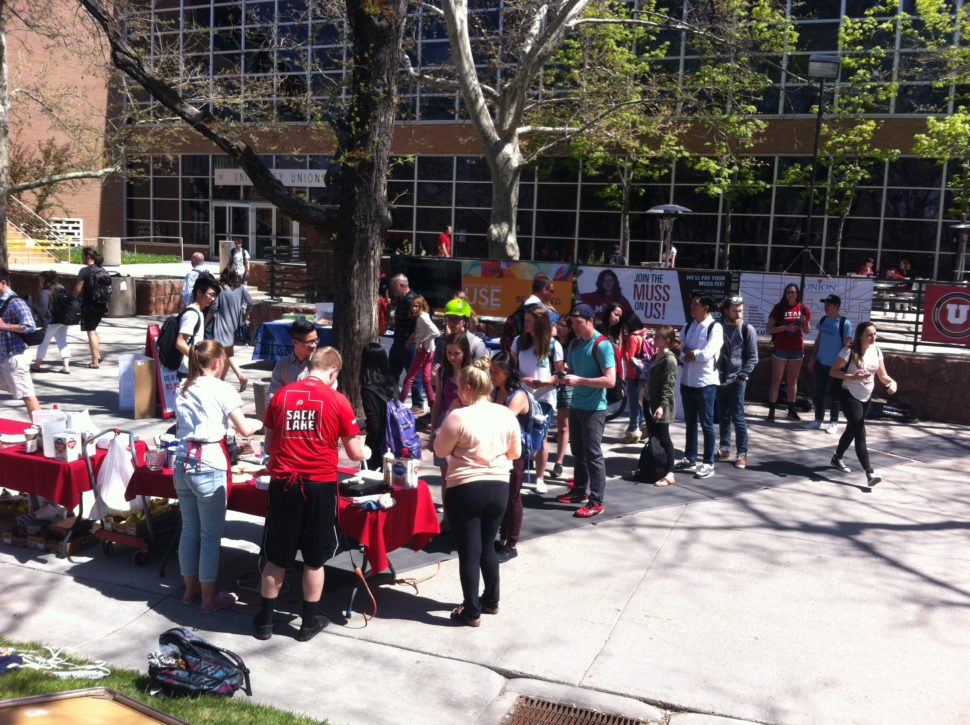 Eaters line up at the Student Union for a taste of Jordan Nilsson’s crepes.

To gain customer validation I did several things to get feedback. On Sept. 29 I served 118 crepes outside the University of Utah Student Union building, and at least 60 of those people said they would like to see crepes on campus. On Aug. 13, I served at least 50 people at a wedding reception and April who was working with us said, “Everybody loves the crepes! People couldn’t keep their hands off them and people came back for more!” On April 21, I served over 80 crepes outside the Student Union, and I got good feedback. I also conducted two surveys, one with eight responses and another with 162 responses.

I won $1,700 from the Get Seeded Grant Program in April, and with that money I bought a food cart from the Los Angeles area for $2,309. I saved money this summer, and with the help of my dad, I bought a 2001 Red Ford F-150 truck to transport the food cart around.

On Oct. 20, I won an additional $3,300 with the Get Seeded Grant Program to get the remaining equipment, such as a generator, a trailer with a ramp to haul the food cart, food and legal administrative expenses in order to get operational.

I would like to serve crepes to Utah fans at football games, including members of the MUSS, faculty, students and teachers on campus at the U, people going to events, such as the Fourth of July at Sugarhouse park with 20,000 people, people at rodeos and South Jordan Days. In addition, I want to serve lunch to hungry workers downtown at the Gallivan Center, business parks and company events. I also want to cater to brides and grooms, their families and friends and also cater to students, friends and family that come to the Get Seeded Final Pitch Events.

I’m grateful for the Get Seeded Grant Program to help me launch Bon Apetit Crepes. Thank you to all those who help put on that wonderful program. It has changed my life for the better. I look forward to making crepes!

About the Author: Jordan Nilsson

One thought on “Student View: From Zero to Crepe Cart in a Few Months”