What started out as a thesis project for six graduate students in the Entertainment Arts and Engineering program at the University of Utah soon turned into a life-saving idea for countless police officers.

“We want officers to be armed with not just weapons, but options,” said Jed Merrill, producer of the project. “We don’t want them thinking shoot or don’t shoot. When under pressure you want them to have a broader range of options. Police officers are almost always found to be justified in individual cases, but looking at body-camera footage, they could do several things differently that might produce a different outcome.” 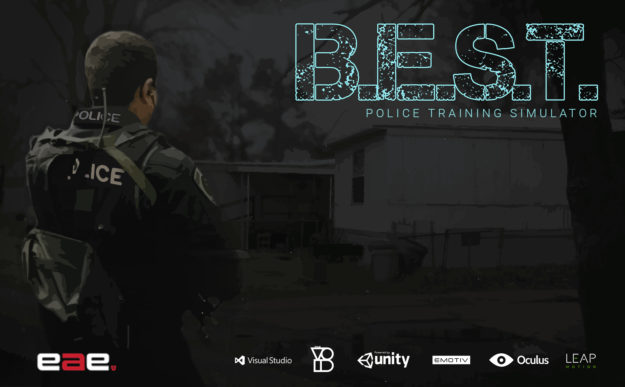 B.E.S.T Police Training Simulator was developed by University of Utah students in the EAE program.

The inspiration for the idea was the police shooting in January 2016 of Utahan James Barker. Another inspiration came from Eric Allen, whose family was personally affected by a similar incident.

The current simulator allows you to interact with a civilian, and depending on how close you stand to him or her, the tone of your voice, and what you say affects how they react. The idea for this came from observing training at P.O.S.T. (Peace Officer Standards and Training).

“Every time someone is shot unnecessarily, it means our training systems have failed,” Merrill said. “B.E.S.T. scenarios in the future will all be based on patterns in real life experiences that lead to either an officer or a civilian paying the ultimate price. We don’t want to just convert existing training to video. It’s all based on solving the problem that is out there.”

The team recently competed in the Microsoft Imagine Cup competition and was named the National Winner in the World Citizenship category for 2016. They also received a $2,500 grant through the Get Seeded program at the Lassonde Entrepreneur Institute at the U.

The team hopes to take B.E.S.T. national and is working with many different partners to get there.  They also have interest from other countries.

“This is a meaningful problem to us; it affects a lot of people,” Merrill said. “Every person killed has a name, a face, a family, and we want their loss to bring about meaningful change for the future. I do think it’s something we can fix, in a systematic way. We want to have a national conversation around this. Our goal is zero citizens and zero police officers killed. We want B.E.S.T. to not just represent our best ideas, but become a platform that includes other people’s best ideas. Wherever there continue to be patterns, that’s what we want to address. We will continue to iterate until we have the solution.”

To learn more about B.E.S.T, visit their website, BESTPoliceTraining.com.

One thought on “Training Police through Virtual Reality”