While treating people in Africa, University of Utah anesthesiologist Sean Runnels invented a suite of intubation tools for placing breathing tubes during medical procedures. Now, he is moving rapidly toward selling the products. With help from students at the U’s Lassonde Entrepreneur Institute and the Center for Technology & Venture Commercialization (TVC), he refined his technology, formed the startup company Through the Cords, raised more than $975,000 and plans to launch the products in fall 2018.

The devices are designed to be cheaper and more accurate than existing options, Runnels said. They include an intuitive, color-zoned, depth-control system that makes it easy to see how deep the tube is placed into a patient’s windpipe and a steerable introducer tip that makes it easy to place.

“Our articulating bougie is designed with the video laryngoscope in mind and will help reduce the many complications and deaths seen every year due to unsuccessful intubations,” Runnels said. “It is also significantly less expensive than the current gold standard of care, which is a fiber-optic device that is costly, difficult to use and easy to break.”

Intubation is the third most common medical procedure in the U.S., with over 40 million performed annually, according to Runnels. Each year, there are more than half a million complications from failed intubation attempts and poor depth control, resulting in more than 100,000 deaths. These complications are most common during emergency intubations. These problems are worse in developing countries with limited access technology and trained technicians.

Students from the Lassonde Institute helped develop the initial business plan for Through the Cords while participating in the Pierre and Claudette Lassonde New Venture Development Center. The students won the $40,000 grand prize in the 2016 Utah Entrepreneur Challenge and $10,000 in the 2016 Bench to Bedside competition. These prizes provided important early funding to help Runnels refine his prototypes.

“We pair graduate students with faculty inventors like Sean to help them understand the market for their technology and its potential,” said Troy D’Ambrosio, executive director of the Lassonde Institute and an assistant dean at the David Eccles School of Business. “The students spend an entire year working with the faculty member. The students come out with a great experience, and the faculty member gets much-needed help.” 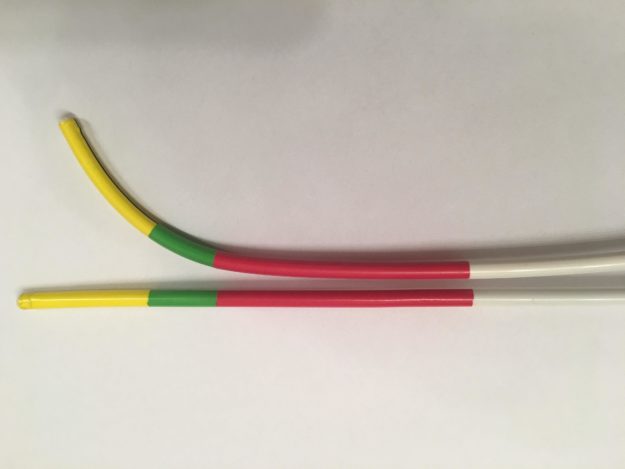 The Through the Cords devices include an intuitive, color-zoned, depth-control system (pictured) that makes it easy to see how deep the tube is placed into a patient’s windpipe.

TVC has also provided substantial support. It helped Runnels spin his technology into the university in 2015 to take advantage of resources available on campus and provided an initial $25,000 grant to develop the initial prototypes.

“We are uniquely positioned within the U’s innovation ecosystem to work with faculty like Dr. Runnels and their cutting-edge intellectual property,” said Aaron Duffy, a technology manager at TVC. “The great success of this technology with the Lassonde Institute highlights how each piece of the innovation ecosystem works together to help the U’s amazing technologies get to the marketplace.”

Since 2016, Runnels has further validated and refined his device, secured six patents and raised significant funding and recognition. He recently raised $600,000 in their first funding round, earned $300,000 in grants from the Utah Governor’s Office of Economic Development and received recognition including an award from the American Society of Anesthesiology’s Foundation for Anesthesia Education and Research.

The story behind Through the Cords began in 2013, when Runnels started a three-year sabbatical working with Mercy Ships in West Africa and the National University in Rwanda. During this time, he performed hundreds of difficult intubations working on the surgical hospital ship Africa Mercy in Guinea.

Runnels found existing techniques to be difficult to teach, too expensive, time-consuming and frightening for the Africans being treated, so he had to improvise. These unique design pressures lead to a method combining the articulating tip of broken fiber-optic scopes with a video laryngoscope, or “camera on a stick.” On returning to the U, Runnels set out to design and commercialize devices specifically for this combined intubation technique.

Throughout the process, Runnels has been inspired by the “Disruptive Innovation” business model championed by Clayton Christensen at Harvard University. Christensen’s theory predicts that establishment company’s internal structures will prevent them from designing medical devices that can meet the needs of tomorrow’s market.

“This is the benefit of combining academics and business here at the University of Utah,” Runnels added. “The combination of global health focus in the medical school, Lassonde Institute business acumen and a supportive far-sighted university leadership is rare.”

Learn more about Through the Cords at ttcmed.com.

The Lassonde Entrepreneur Institute is a nationally ranked hub for student entrepreneurship and innovation at the University of Utah and an interdisciplinary division of the David Eccles School of Business. The first programs were offered in 2001, through the vision and support of Pierre Lassonde, an alumnus of the Eccles School and successful mining entrepreneur. The institute now provides opportunities for thousands of students to learn about entrepreneurship and innovation. Programs include workshops, networking events, business-plan competitions, startup support, innovation programs, graduate seminars, scholarships, community outreach and more. All programs are open to students from any academic major or background. The Lassonde Institute also manages Lassonde Studios, a new five-story innovation space and housing facility for all students, in partnership with Housing & Residential Education. Learn more at lassonde.utah.edu.