“I am a simple man with complex ambitions,” said Vitaliy Mahidov explaining his journey as an entrepreneur. Mohidov is a Ukraine native who graduated in 2016 with an MBA from the David Eccles School of Business at the University of Utah, where he launched his Wi-Fi audio company, CloviTek. “Difficult is an easy word to describe me” Mahidov said. “But I am sincere and true to myself.” That passion is what has led him to do all he could to get his business on the right track.

Mahidov came to the States in 2005 with $3 in his pocket. Everything was new to him, and he did not know what life prepared for him. Nevertheless, he always knew that if he was to succeed, he had to keep moving forward. Since his childhood, regardless of his circumstances, he prepared himself for challenges in life. His life in the orphanage and then in foster care prepared him for life on his own when he turned 18. He successfully completed his studies at the Chernivtsi State National University in Ukraine and received the bachelor of science degree in electronics. Then he received his degree in computer science from Utah Valley University. While he was a student at UVU, a local company in Orem employed him as the technical sales engineer. During that time, he realized that he had to move on to pursue his business degree and he applied to the Eccles School to get his MBA degree. 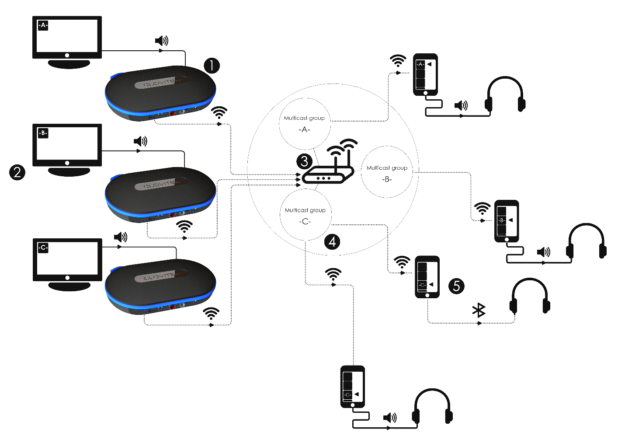 The CloviFi devices delivered Wi-Fi audio to phones and other devices.

During the course of his studies, he had an idea that he did not know how to execute. He reached out to many people for help before he became aware of the Lassonde Studios at the University of Utah. He wrote to one of his professors asking for help:

I sincerely appreciate your help with this. After so many unsuccessful tries to get in touch with the right people to get any help, I was able to connect with Troy D Dambrosio who was an excellent guide in helping me to understand what resources are available for students in order to succeed with their ideas.

I did not tell you something, but I have tried to contact U of U different departments in the past. When I was about to give up, I decided to give two more tries: contact you and contact a professor from the innovations department who also gave us a class during the residency course. I received the somewhat less encouraging response from him and was hoping to hear something positive from you.

Then I decided to follow your guide. I went to the website you recommended and went through pages and found someone very wonderful who connected me with Troy. I must admit that I was shocked with the prompt response and at the same time I exhaled with the feeling that finally someone actually would take the time to listen to me. I had the most wonderful conversation with Troy where he let me know that there are resources that are available for students like me at no charge. I was very relieved to know about that.

So, after over 20 contacts (emails and calls) I feel that finally, with your help, I got to my destination. I am immensely grateful for your help and guidance. I hope that in some ways in the future I could be of help to you as well. I know that there are kind people like yourself and Troy who can and will help when in need. Not that others do not help, but at least, give me some encouragement to move forward rather than leaving me in the state where I am feeling that there is no future. This is how I went through life, meeting different people, who once again in some ways gave me hope to look forward to something good. Thank you again!

In 2016 and in February 2017 CloviTek received seed money for product development from the Get Seeded program through the Lassonde Entrepreneur Institute. Many people recognized the need of the CloviFi product and acknowledged that it can easily solve their problems with a private listening experience.

The patent pending CloviFi device – Personal Sound Amplifier Product (PSAP) – is for wireless audio consumers with hearing loss or at home who are dissatisfied with current offerings or are not aware of those offerings in the wireless audio market. With the CloviFi device, kids, teens and adults can enjoy their favorite music, TV show or game without bothering anyone nearby at home or in public places such as hospitals, common waiting areas at hospitals or doctors’ offices, or senior living homes. Learn more at wifihearing.com.

Mahidov continues to work with the Lassonde Studios to bring the CloviFi to the market. He is very grateful for everyone who helped him in his journey to make his idea become a reality. His company is engaged with an intense summer program called Rush to Revenue, which is providing mentorship and grants to help develop exceptional student startups. 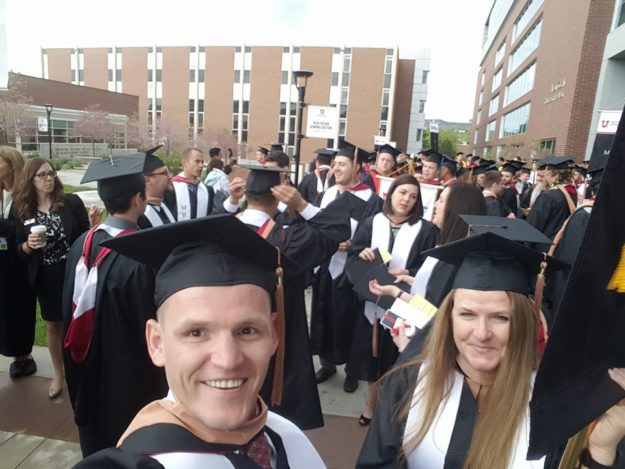 Vitaliy Mahidov (bottom left) graduated with an MBA from the Eccles School in 2016.