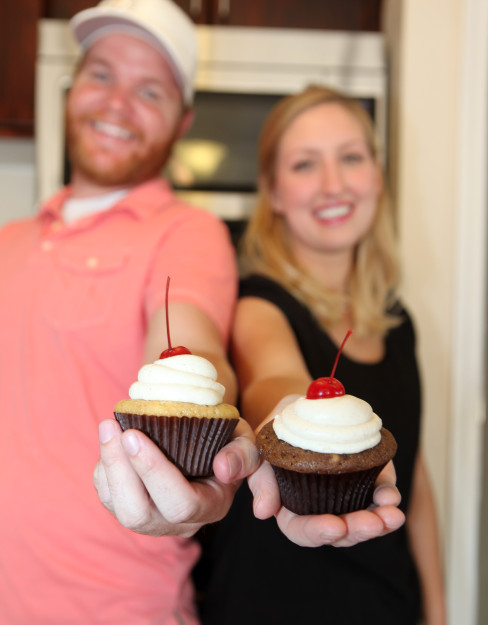 Erik and Cori Larsen launched a cupcake store in India featuring flavors such as coriander, anise and chicku.

University of Utah graduate Erik Larsen and his wife Cori opened the first of what they hope to be a franchise of cupcake shops in India today.

“It’s been an adventure with a lot of trial and error,” said Erik, alum of the Department of Communication. “In India, all the products are different and most people cook over an open flame. We are training people who had never seen a whisk and who had no idea what a cupcake was.”

The Larsens created their first cupcake company, Heaven Cupcake, in Salt Lake City in 2010 with the help of the U’s Lassonde Entrepreneur Institute and its Foundry program, a business discovery program for students. The Foundry helped the couple develop their company’s logo, website and a promotional video for the Food Network’s show “Cupcake Wars.”

The couple’s multiple appearances on “Cupcake Wars” gave them international exposure and caught the attention of a group of Indian entrepreneurs.

Now, with their Indian partners, they have launched what they believe is the first cupcake store in Mumbai featuring an American chef and cupcake shakes. Called The Boston Cupcakery, the menu includes classic American cupcake flavors as well as unique Indian inspired flavors such as coriander, anise and chiku.

The grand opening is only the first of five set to occur this year. Over the next five years, the Larsens anticipate The Boston Cupcakery will become a large franchise with 30 to 40 shops across India.

Since their arrival in India in September, they have been busy experimenting with recipes, managing construction, training new employees and importing ingredients from places as far as France, Switzerland and the U.S. along with overseeing their bakery in Salt Lake.

The U’s Lassonde Entrepreneur Institute, which is part of the David Eccles School of Business, provides a wealth of programs and services to student entrepreneur like the Larsens. Programs include business plan competitions, scholarship opportunities, internships and business incubators.

“Our programs provide an opportunity for students to explore their passions,” said Troy D’Ambrosio, executive director of the Lassonde Entrepreneur Institute. “It’s exciting to see the Larsens take their passions all the way to India.”