Cam Cameron graduated with an MBA from the University of Utah in 2013. He started his MBA program while working for Goldman Sachs and hit the ground running after graduation with a startup of his own. During the last year of his MBA program, Cameron took all of the entrepreneurship electives offered. Those courses helped him create a business that combined two of his passions: soccer and a commitment to build a company that made a difference. He recently sat down with the Lassonde Entrepreneur Institute for an interview.

Tell us a little bit about Just Play Cleats.

Just Play Cleats designs the highest quality and performance soccer cleats at a fraction of the price of top brands. Our shoes are unusual in that they are unbranded — no logos. We want to empower players to be their own brand rather than a billboard. The brand does not define the player but rather how he or she conducts themselves on and off the field.

“This company is a manifestation of my lifetime passion for soccer.” 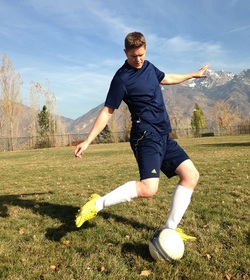 Our approach to business is just as unconventional as our cleats. Our ambassadors travel the world donating soccer cleats and supporting the growth of soccer wherever we go. We focus on supporting and developing institutions and players most in need, so that no one who wants to play soccer is left behind due to cost considerations.

This company is a manifestation of my lifetime passion for soccer as a sport. I have played soccer since the age of four. I love soccer, and I love its potential to teach and to transform. It pains me to see so many people unable to play soccer or to compete at the highest level due to the cost of equipment. The most expensive part of a player’s kit is his or her cleats. High-end cleats are normally $200-$300 a pair. And the performance matters. Ball control, touch, handling, passing — the entire performance repertoire of a player is influenced by the shoe. Player longevity and injury increases in poor quality shoes, too. It is just more fun to play with top-level shoes — I know this — and I wanted to make playing more fun and safe for everyone.

“The classes I took in the last year of my MBA moved me from just having an idea to taking action to make it real. Without the shift from talking to action, none of this would have happened.”

What were the first steps you took to take your idea and begin to make it real?

I started working out the details of my business idea during my first entrepreneurship class at the University of Utah. The entrepreneurship program at the University of Utah was full-on “on the court,” which I really liked. Basically, the classes I took in the last year of my MBA all moved me from idea to action, and from there to making it real. I spent a lot of time speaking to product managers, shoe designers and athletic footwear manufacturers to understand how to produce reliably at the quality level I wanted, where and how to secure a manufacturer, how to design shoes and things like that. I really enjoyed the prototyping aspect — getting one made, and then playing in it, and then getting feedback from others.

“My advice is to start a company that in some way adds value to the world or the community. Do something that matters.”

What has been, for you, the most surprising part of the journey so far?

I have been overwhelmed at the amount of support from all those who hear about Just Play Cleats and the positive impact the company is having on the world through the game of soccer. I wondered at the beginning whether people would be skeptical of the company and its mission or be suspicious of our brand (or, more accurately, lack of a brand) at the beginning. What has been surprising is the positive feedback about the cleats from the soccer community and the positive feedback about the potential of the company itself. It has been surprising how much people have wanted to help and be involved.

Meetings. A ton of meetings, as we move from direct sales to retail. We’re confident in the performance of the designs and models we have, and feel comfortable on the manufacturing and operations side at this scale. What is important for us to focus on now, in my opinion, is supporting our retail channel and confirming our expectations for sell through and our ability to provide great support to our retail partners.

Do you have any advice for aspiring entrepreneurs?

My advice is to start a company that in some way adds value to the world or the community. Do something that matters. When it is time to grow, think hard about how to build out your team. If you know people that have scaled up a company before, talk to them — and by “talking” I mean listen to them. What I learned is that I needed to fill each position with someone who was committed to contributing more than they were taking. You then have a team that makes the individual members better than they were otherwise and the whole thing will flourish.