Through the Cords, a Salt Lake City-based company that launched at the University of Utah with help from the Lassonde Entrepreneur Institute, is stepping up production and distribution of its intubation device, the Runnels Total Control IntroducerTM (TCI), to meet the urgent need for first-attempt intubation success during the COVID-19 Pandemic. The TCI is uniquely positioned to have a large impact on intubation safety for both providers and patients.

The Runnels TCI is a novel articulating intubating stylet designed to increase first-pass breathing-tube placement during video laryngoscopy-assisted intubations. The critical benefit of using the TCI on each intubation is the distance it allows between the patient and the provider during intubation, while facilitating successful introduction of the breathing tube. This feature preserves the viability of the provider population and the health care system through this pandemic and beyond by keeping providers safe from contamination. The innovative and simple intubation tool is designed to reduce intubation complications and mitigates the provider’s exposure to infectious particles.

The Runnels TCI is a novel articulating intubating device.

Prior to the COVID-19 Pandemic, intubations were the third most common medical procedure in the U.S. with more than 30 million performed each year. More than half of failed intubation attempts were due to the inability to direct the endotracheal tube into the trachea, or because of inaccurate depth control. These complications result in compromised patient outcomes, 60 thousand attributable deaths, and an estimated cost of more than $5 billion in increased medical care needed because of first-pass intubation failure.

A look at COVID-19 by the numbers: According to the Health Affairs Blog, between 40 and 60 percent of Americans, or 100 million, will be infected with COVID-19 over an estimated period of 6 to 18 months. Conservatively, some 4.5 million infected individuals will be critically ill and require intubation. This increase in intubations not only exposes the provider population to aerosolization of the virus and risk of infection, but also creates higher risks for intubation complications such as brain injury, cardiac arrest, and death to patients from failed intubation attempts. 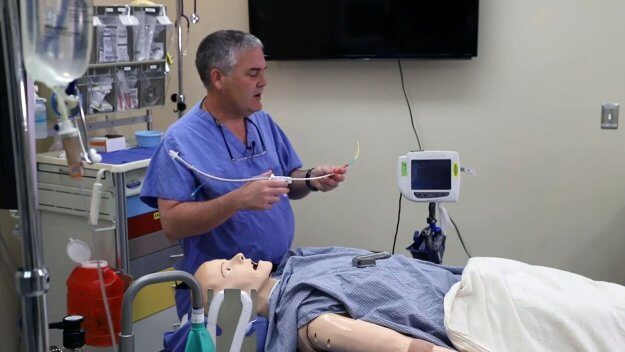 Dr. Sean T. Runnels, anesthesiologist and associate professor of anesthesia at the University of Utah, founded Through the Cords.

Given the current resource-restricted healthcare system, swift, successful intubations result in better patient outcomes, less potential for provider exposure, and reduced stress on the already over-taxed providers. Universal use of the Runnels TCI resolves many of the pressing issues regarding intubation, and the preservation of the limited number of providers qualified to perform intubations.

Dr. Sean T. Runnels, anesthesiologist and associate professor of anesthesia at the University of Utah, founded Through the Cords, a device innovation and manufacturing company focused on next-generation airway tools for use with video laryngoscopes. The company currently manufactures and distributes three products, the Runnels TCI, the Runnels Intuitive Depth BougieTM (IDB), and the Runnels Intuitive Depth ExchangeTM Catheter (IDE). The devices are manufactured in Salt Lake City with all components sourced in the US.

Learn more about Through the Cords at ttcmed.com.