If the startups that entrepreneurs created were reflections of their minds, Mark Pittman’s Blyncsy – a company that generates and aggregates big data from any internet-connected device – would fit the bill. It’s because of Pittman’s desire to make sense of an interconnected world that Blyncsy successfully secured $2.6 million in venture capital from Pelion Venture Partners and Peterson Ventures in 2016.

We caught up with Mark Pittman, who graduated with a JD/MBA in 2015, to learn what it takes to survive the emerging market of big data as an entrepreneur.

What is big data?

Blynscsy is big data, fueled by the world’s desire of having everything connected to the internet, the desire to break down everything into diagnostic parts and the need to measure, check and monitor that data.

How did you enter into big data through Blyncsy?

I was sitting at a traffic light. When it didn’t turn to green, I called Salt Lake City officials to learn why that was when I learned there are sensors that are triggered by the cars within a certain radius of a traffic light. That was the inspiration that lead me to work with engineers to build the technology that runs Blyncsy. 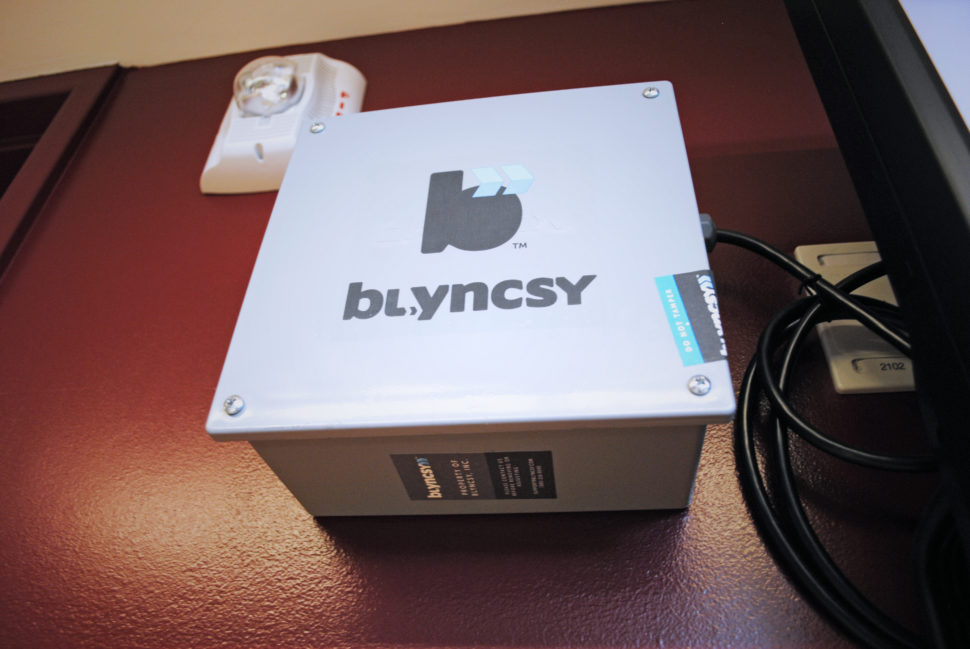 Blycnsy mounts devices like this on in public spaces to monitor human traffic.

Blyncsy develops hardware that is affixed within an area to collect data. Why was developing hardware important?

When we first built Blyncsy, we wanted to use data that wasn’t currently available. When we first built Blyncsy, the world started to depend more on an internet connection, such as cloud data. It wasn’t an ideal match for us and for the opportunities that we saw, which is why we pursued hardware with a sensor network that collects traffic data from any internet connected device.

What goals do you have for Blyncsy?

We’re focused aggressively on growth, which means scaling our sensor network across the country. Everything is moving toward a standardized product set, but there will be customized features for our customers that will differentiate us from our competition.

What are the challenges associated with growing Blynscsy as a company?

Failing fast in a new industry is imperative. The faster you learn, the better. And you can only learn if you try. If you don’t try something, you can’t figure out what to do next. Failure in iteration.

How do you overcome your challenges?

Hiring smart people when growing a company. A team that takes as much ownership and initiative as I do.

What are the business opportunities in big data?

Why start up a venture in Utah?

Cost of living and cost of starting up is key. Utah is a two-hour flight from almost everything in the United States. We benefit from the cultural praxis of our surrounding states. For railroads and trucking companies, we’re a state that everything has to go through, which puts us in a unique position.

You’re focused on growing Blyncsy for now. But what solutions do you hope more entrepreneurs and innovators will focus on?

Issues that affect the societal and environmental level problems in terms of population growth, overcrowding, air pollution and climate change. Some of the most important issues that need to be solved, which can be very profitable.

What is your daily ritual that helps keep you sane?

I take time for myself. I set time aside, as much as possible, for exercise. And I take time to decompress. Before I go to bed, I turn off all of my electronic devices.

What has helped you succeed as an entrepreneur?

People will try to talk you out of not doing what you’re interested in pursuing. And you have to learn how not to take “no” for an answer and be relentless in the pursuit of your vision.

What have you learned about yourself through entrepreneurship that no other path could have taught you?

I learned how incredibly passionate you can be about something without knowing that you are. I fell in love with my company and the relentless pursuit of its growth.

What motivates you do to grow Blyncsy?

It’s nothing to do with money or to grow the company for the sake of it. Once you build something that someone else also wants it’s inspiring, it’s motivating and you don’t want to stop.

About the Author: J Abubo