When the University of Utah and David Eccles School of Business announced plans for Lassonde Studios, the people behind it said they wanted to create a place where students could “dream big and change the world.”

After much anticipation, the unique, $45 million, copper-clad building opened in August 2016. Lassonde Studios merges an innovation space on the first floor for all students with four floors of residential space above for 400 students. All students at the university are invited to “live, create, launch” here.

The first students to use Lassonde Studios are finishing the first academic year in the building in May 2017. Their feedback – on top of international praise, architecture awards and other successes – all point to the same thing: The building is achieving its mission, and the successes so far point to many great things to come.

“It’s hard to believe we have only been in the building for one year. Our students have already achieved so much in just nine months,” D’Ambrosio said. “I have heard from so many students who have said the experience at Lassonde Studios has changed their lives, and we have seen countless student projects, startups and inventions this year. If the first year is any indication, we have many amazing years ahead of us. We expect this building to continue to grow and evolve with students for many years. Imagine what the next 5, 10 or 20 years will bring.”

The first group of Lassonde 400 residents who lived in Lassonde Studios during the 2016-2017 academic year.

Megan Glasmann is one of the 400 students selected from 1,300 applicants to live at Lassonde Studios during the 2016-2017 academic year. Her experience is representative of the thousands of students who either lived at Lassonde Studios or attended events and activities provided by the Lassonde Institute.

A Park City, Utah, native, Glasmann is pursuing a Ph.D. in school psychology while also dabbling in entrepreneurship. Among other accomplishments, while living at Lassonde Studios, she started a company that provides unique, geometric art installations for homes and offices. She got her start by creating murals from tape to decorate bedrooms at Lassonde Studios.

“I applied to live at Lassonde because I was interested in being in an interactive, passionate, involved community, and that’s exactly what I got out of this,” Glasmann said.

Another student who has benefited from his time at Lassonde Studios is Garrett Holm, who is studying finance. The Sandy, Utah, native moved into Lassonde Studios hoping to have a life-changing experience, and he received more than expected. While living here, he met many diverse students and became a student leader as a director of the company launch space within Lassonde Studios.

“I can’t tell you how much of a transformative experience it has been for me,” Holm said. “Being able to live on campus, specifically at Lassonde Studios, I met a collaborative community of different people I wouldn’t have met anywhere else. I encourage everyone, regardless of their interests, to apply to live here.”

Yet these are only two of the students who were involved with hundreds of different activities and events for entrepreneurs at Lassonde Studios during the 2016-2017 academic year. Thousands of other students had a similar experience, meeting new people, learning how to make things, starting companies, trying something different and following their passions.

Taylor Randall, dean of the Eccles School, explained the Lassonde Institute’s mission and the purpose of Lassonde Studios.

“We want to give every student on campus a transformative experience through entrepreneurship,” he said. “For some students, that means creating a product and starting a company. For others, it means joining someone else’s project. For some, it’s just trying something new and applying what they are learning. With Lassonde Studios, we now have the space and resources to provide this experience to every student at the University of Utah. We don’t think any other university provides the same amount of resources and opportunities to student entrepreneurs.”

And the world is starting to take notice.

Before the building opened, Fast Company, Bloomberg Businessweek, The Associated Press, Arch Daily and many other news outlets reported on the unique mission and design of Lassonde Studios.

In the same month it opened, The New York Times featured Lassonde Studios prominently in a report about how “universities are investing in big, high-tech buildings in the hope of evoking big, high-tech thinking.” It reported: “The residential component has been absorbed into this live-work building, anticipating the early lifestyle of dot-com employees, whose living quarters usually resemble walk-in closets. The Utah version is more plush, however.”

International attention and praise continued after the building opened.

In early 2017, Architectural Digest named Lassonde Studios one of the “nine best new university buildings around the world.” Then Fast Company featured the building, reporting: “No, this is not one of Silicon Valley’s many office spaces cum playground; it’s Lassonde Studios, a $45 million experiment in education.” Soon afterward, SXSWedu, an education conference affiliated with the SXSW technology and music festival, named Lassonde Studios the overall winner of the Learn X Design awards. Lassonde Studios also has won other design awards including an award as the most outstanding public building over $10 million from Utah Construction & Design in 2016 and an “Award of Excellence” from the Associated General Contractors of Utah.

In addition, Lassonde Studios and related activities at the Lassonde Institute have helped improve the university’s national rankings. Beyond consistently ranking as a top-25 school for entrepreneurship by Princeton Review, in 2017, the University of Utah was ranked as the No. 1 college for aspiring entrepreneurs by LENDedu and the No. 1 university for technology commercialization by the Milken Institute.

While attention and awards continue to come, the Lassonde Institute is making arrangements for the second group of students to “live, create, launch” at Lassonde Studios during the 2017-2018 academic year.

“We expect to build on our success every year,” D’Ambrosio said. “We designed Lassonde Studios and the programs inside to evolve and improve over time. We are managing the space like the entrepreneurs we work with, moving quickly and always looking for ways to improve. We are working closely with our students to incorporate their feedback, and we expect next year to be even better than the first.”

Jaron Hall is another student who worked at Lassonde Studios during 2016-2017. A business major from Murray, Utah, he managed a statewide business model competition for the Lassonde Institute while also receiving free office space at Lassonde Studios to develop several startups, including Utah Maids, an online booking service for cleaning. Hall is graduating from the university this spring and looks forward to working for himself in the foreseeable future.

Like the other students involved at Lassonde Studios during the first year, Hall’s experience is a sign of great things to come.

“My startup would not be where it was today if it weren’t for the Lassonde Studios and Lassonde Institute,” he said. “Every day I am being introduced to new valuable contacts, coming up with creative ideas and working harder and longer than ever before.” 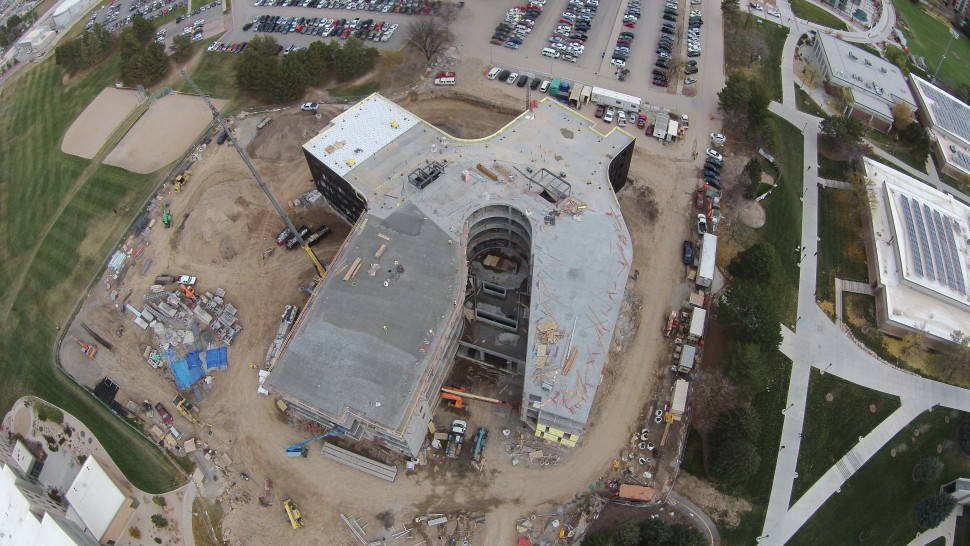 Drone image of the construction site for Lassonde Studios.

2001-12: Growth – The Lassonde Entrepreneur Institute started as a single program in 2001. In 10 years, it grew rapidly, adding many programs for students across the state and helping the University of Utah become a top-25 school for aspiring entrepreneurs.

2013: Inspiration – Work started on what became Lassonde Studios. The Lassonde Entrepreneur Institute engaged many people in the early planning stages. Most importantly, it engaged students, asking them what sort of environment they wanted.

2014: Groundbreaking – The dream for Lassonde Studios started to become a reality in October 2014, when the University of Utah broke ground on the project. The endeavor started attracting international attention at an early stage, gaining momentum at every stage of construction.

2015: Construction – Much of the early phases of construction consisted of pouring massive amounts of cement to form the five-story building. Lassonde Studios has an open floor plan inspired by industrial lofts that can evolve over time as needs and preferences change.

2016: Move-In – After much anticipation, the first students moved into Lassonde Studios on Aug. 18, 2016. The first group of residents is known as the Lassonde 400 L1 group. Students collaborated virtually before moving in and immediately started working on interesting projects.

2017-Future: Launched – The Lassonde Entrepreneur Institute completed the first academic year in Lassonde Studios in May 2017. The year brought phenomenal growth and momentum to an entrepreneur program that was already among the nation’s best. Many great things are expected in the future.

Lassonde Studios is a new $45 million home for student entrepreneurs and innovators at the University of Utah. The facility, which opened in August 2016, is the place where students from any major or background can “Live. Create. Launch.” Students can apply to be one of the “Lassonde 400” residents. All students at the University of Utah are welcome to use the Neeleman Hangar, which is the 20,000-square-foot innovation space on the main floor to connect, test ideas, build prototypes, launch companies and learn by doing. Above are four floors of themed residential space. Lassonde Studios is in the center of campus and is advancing the University of Utah as a top school for entrepreneurship. The building and diverse engagement opportunities are managed by the Lassonde Entrepreneur Institute, an interdisciplinary division of the David Eccles School of Business. Learn more at lassonde.utah.edu/studios.